Let me preface this post with this: OHH EMM GEE.  SO.MANY.PICTURES.  I apologize in advance...this is a very photo-heavy post (but hey, when I'm reading other people's blogs, I LOVE when they're loaded with pictures...so I'm assuming anyone reading mine feels the same way).

Wow.  What a holiday!  Definitely one for the memory books (aren't they all?!!).  The only sucky downside to Christmas 2014 was that Mike had to work the ENTIRE time.  He missed out on Christmas Eve fun and Christmas Day fun.  Boo hiss.  He did get to spend Christmas morning with us and see Patrick open presents and ride his rollercoaster, so that was great--but man, did we really miss him at our other shindigs.  Thankfully, he gets his schedule a year in advance so we already know he's off next Christmas Eve and Christmas Day.  WOO HOO!

Anyways, Christmas was super exciting--Patrick is almost at the fully understanding what's going on stage (I expect next year he'll be there), and really loved opening presents and the excessive amount of available food at his level at seemingly every single party we went to.

First off, in case you missed it, here's our Christmas card from this year--I totally took advantage of the early snow we had back in November and used that for our annual Christmas card.  I love the way it turned out--I'm a huge fan of the black and white lately. 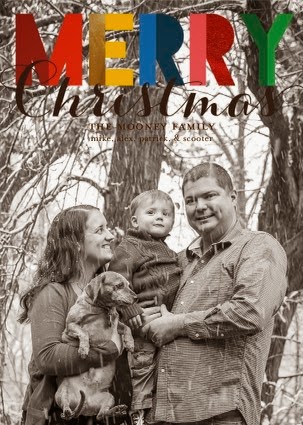 So we started off Christmas Eve with celebrating at Mike's side (it was also his dad's birthday--but we had celebrated that earlier in the week).  Patrick really REALLY loved opening his gifts (and helping everyone else open theirs!) and then having a meltdown when a toy he got (or Lizzy got) didn't get opened and taken out of the box ASAP.  Little diva!  It was close to his nap time so that was probably one of the reasons why he was kinda "on edge".  Overall, we had a great time with the Mooneys celebrating Christmas early and exchanging presents with everyone. 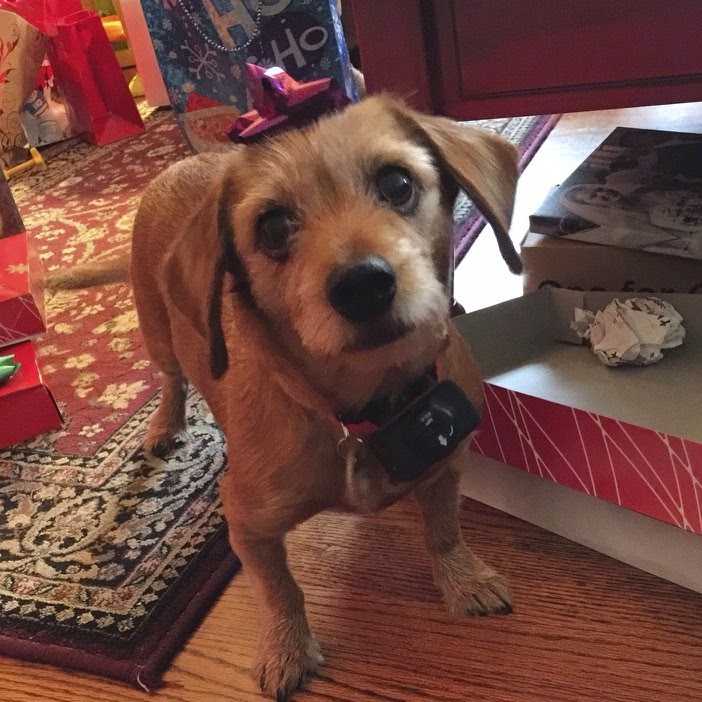 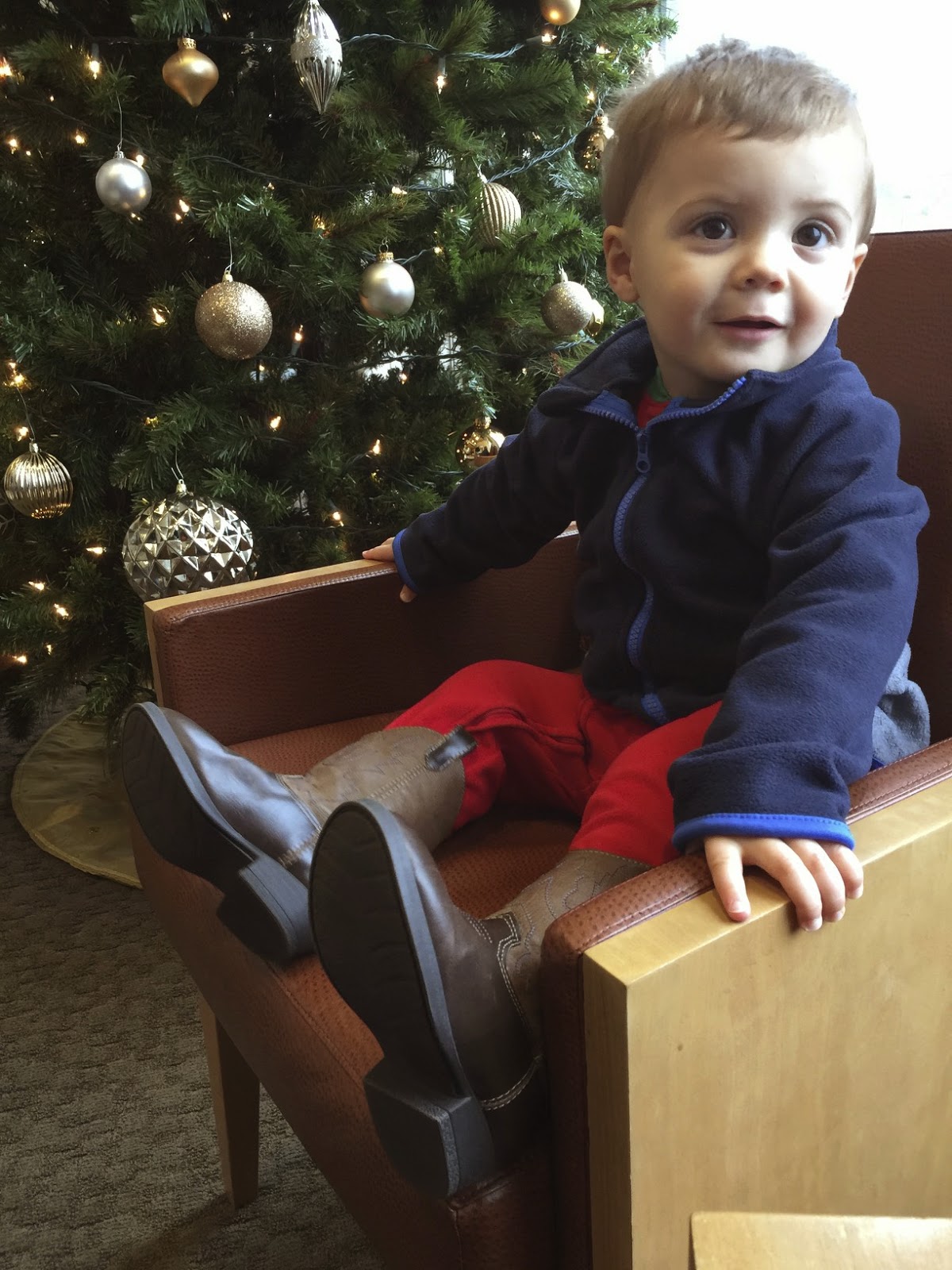 at the bank on our way to the Mooneys--keepin' it classy with jammies and cowboy boots. 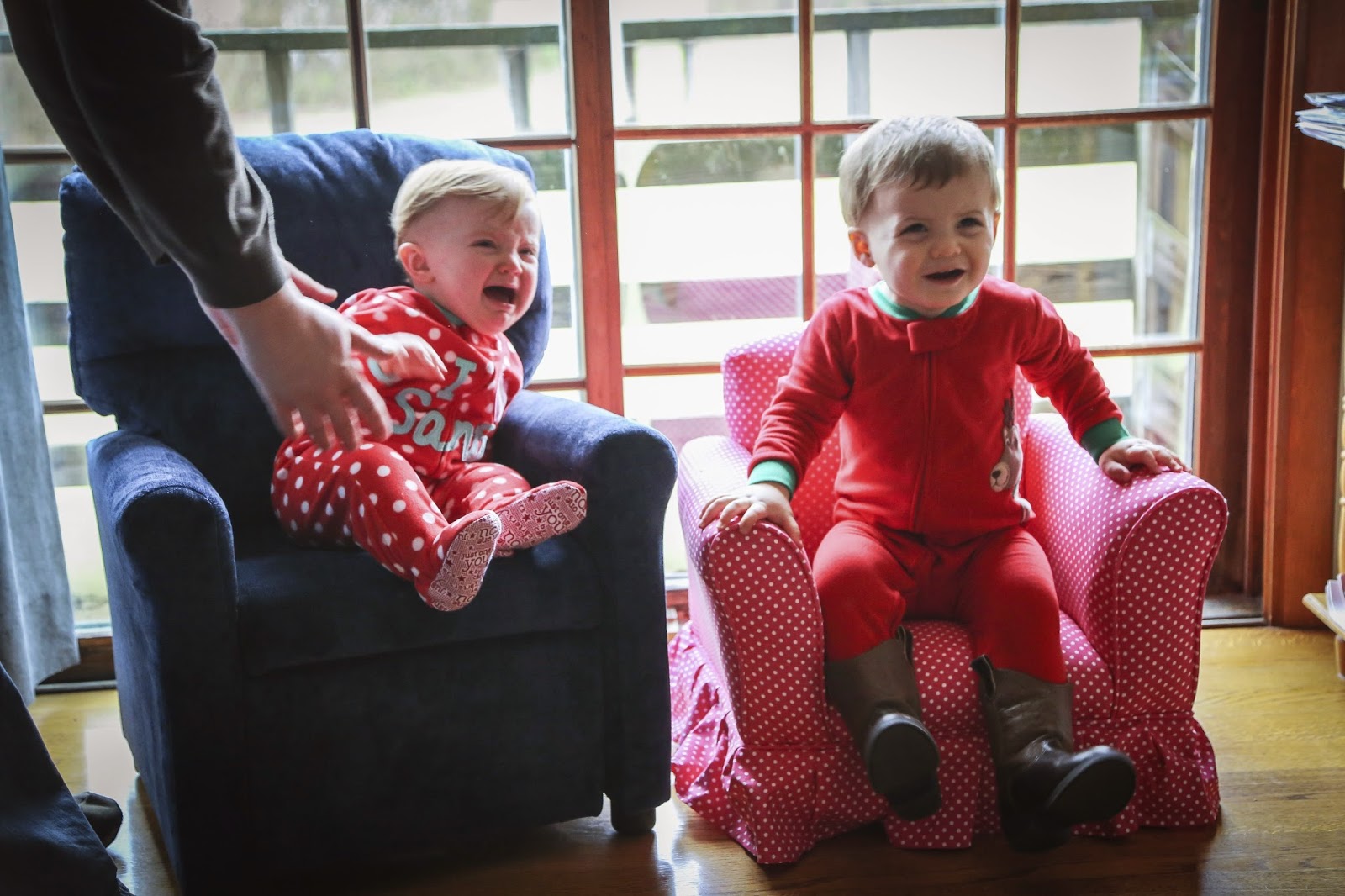 Lizzy and Patrick got new chairs for grandma and grandpa's house!  Apparently they were in no mood to take a picture on each others and instead just wanted (needed) a nap STAT.

For some reason I was in a picture-taking mood on Christmas Eve--especially doing comparison pics from years past, so when Patrick arose from his siesta I got Scooter in some holiday appropriate PJs and snapped some pics. 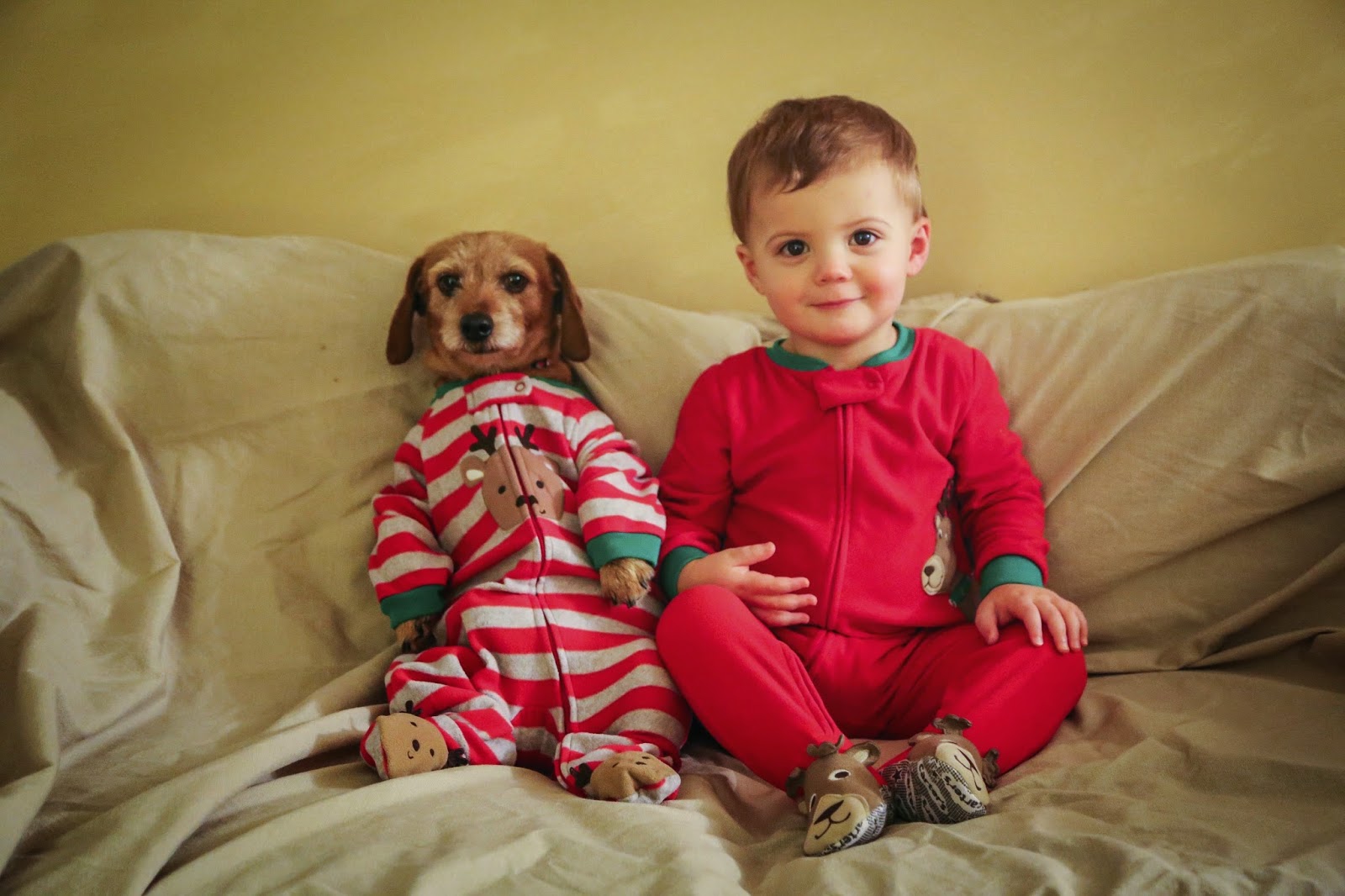 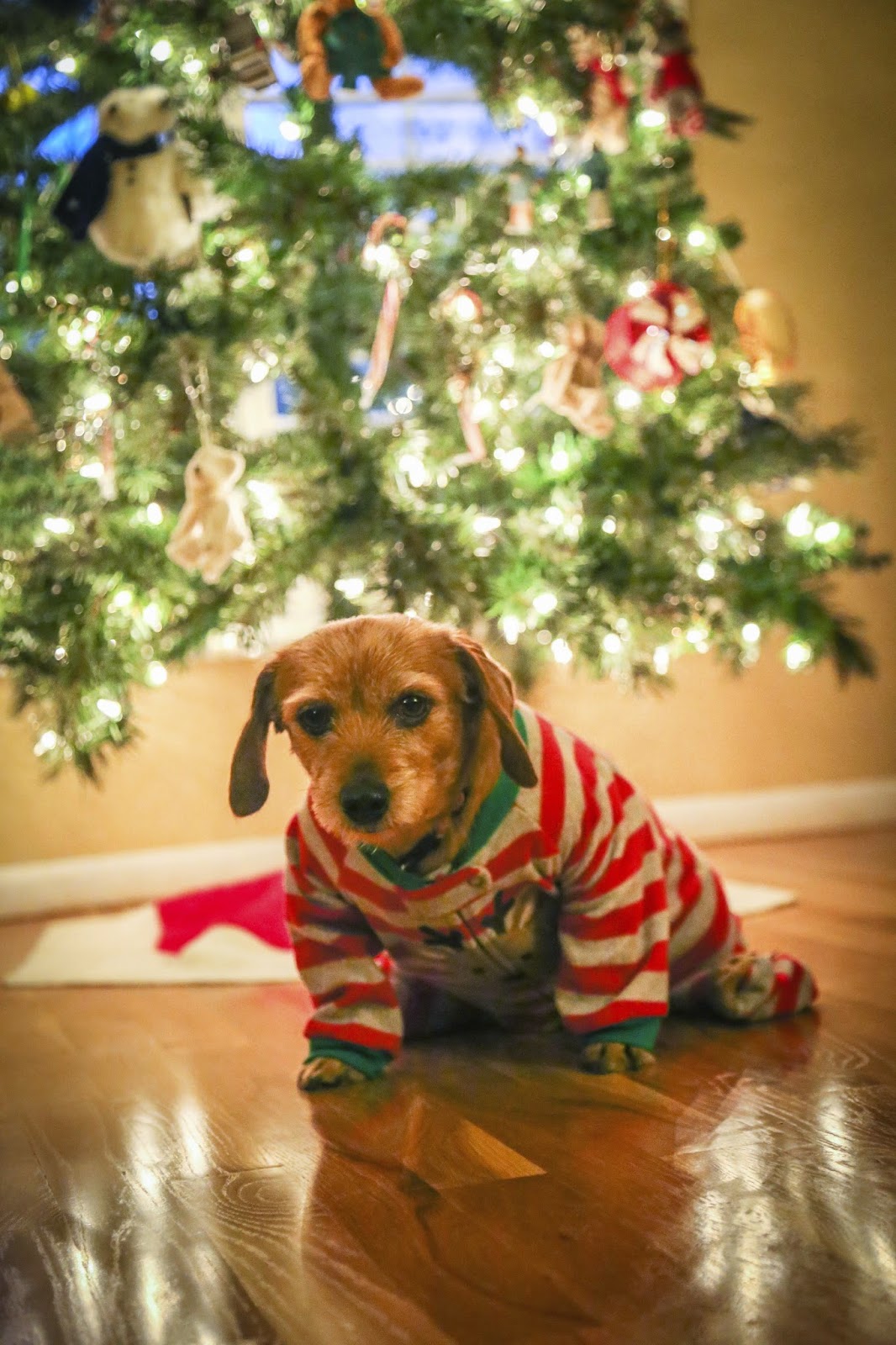 But I couldn't stop there (shocker)--I had to go ahead and do some comparison pics from years past as well...who doesn't love those?!! 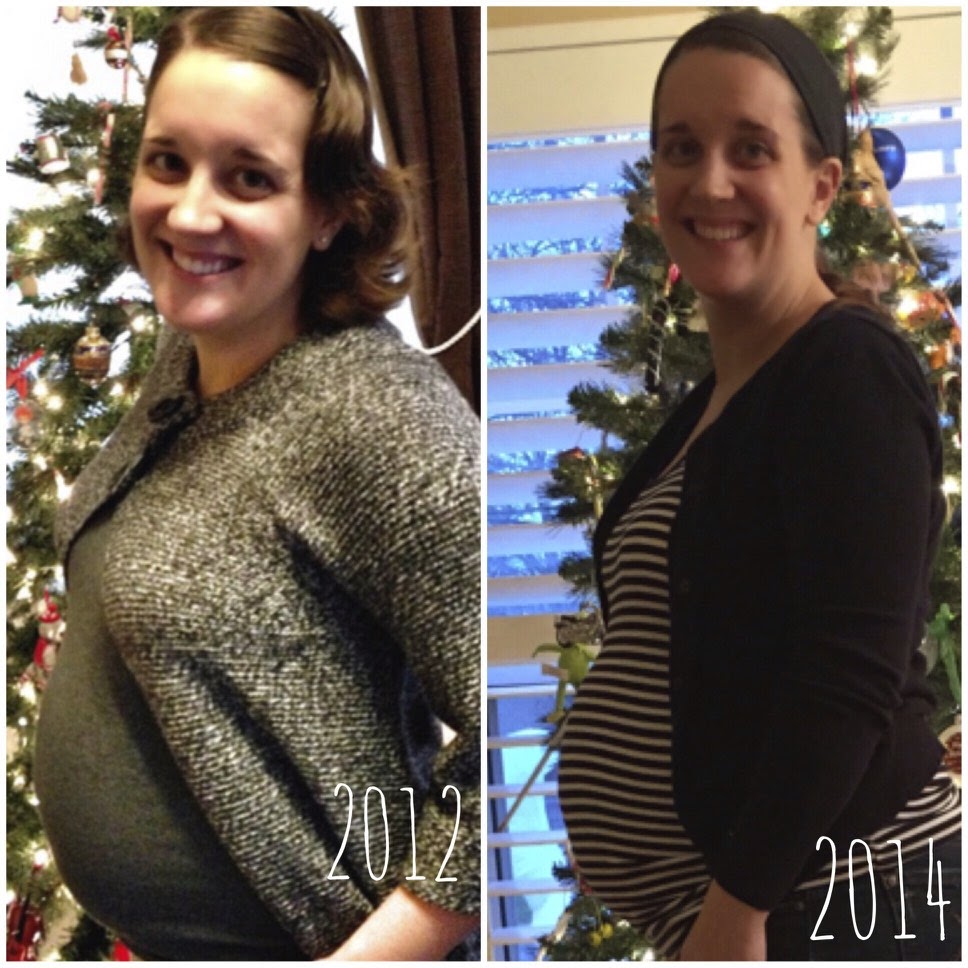 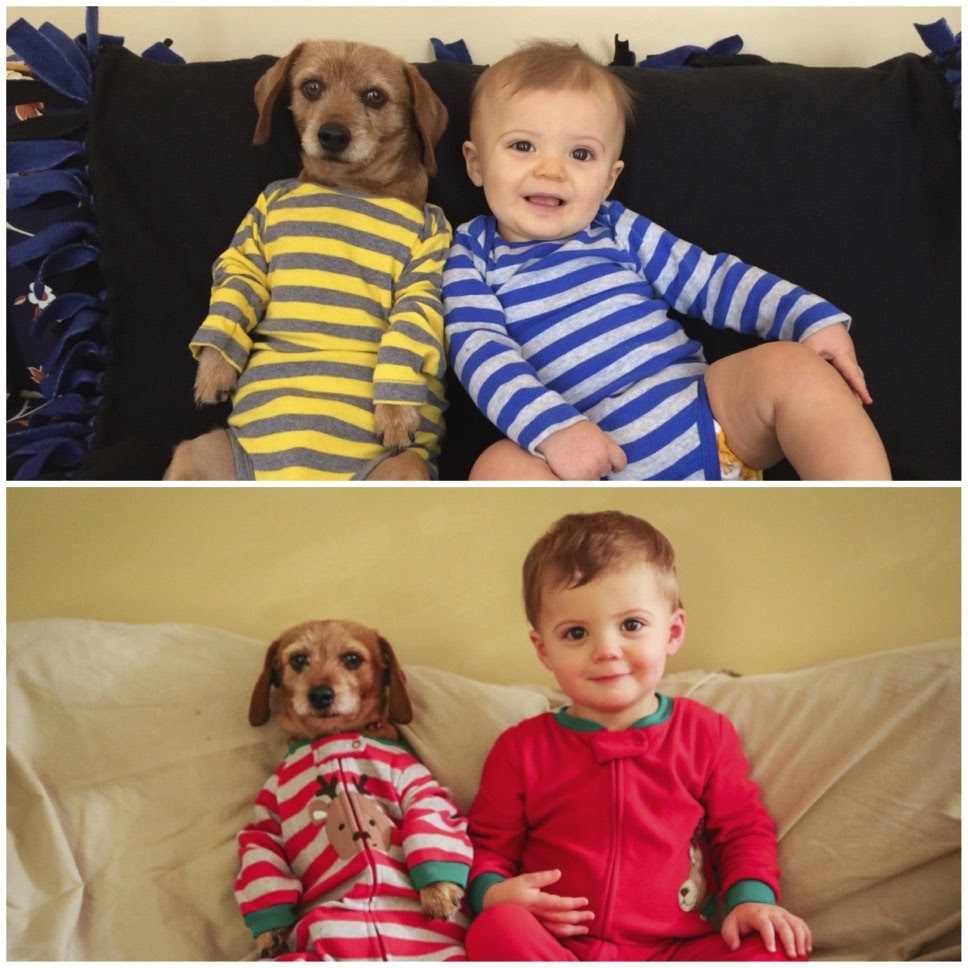 After my little photo taking session, we then headed over to my mom's for Christmas Eve dinner.  Gosh, I so wish Mike could have been there!  It is a wittle bit hard these days being 6 months pregnant and chasing after an almost 20 month old.  Thankfully I've got the best family in the world that will help me out with whatever, so that's nice :)

My aunt Kate surprised me with these AH-MAZING custom TOMS she had made for me with with favorite little pooch on them!  She sent the guy a pair of TOMS and this fella over at Freak Your Sneaks whipped these bad boys up for me!  I cannot WAIT for the weather to get warmer (and nicer!) for me to wear these!  EKKK!!  I love them! 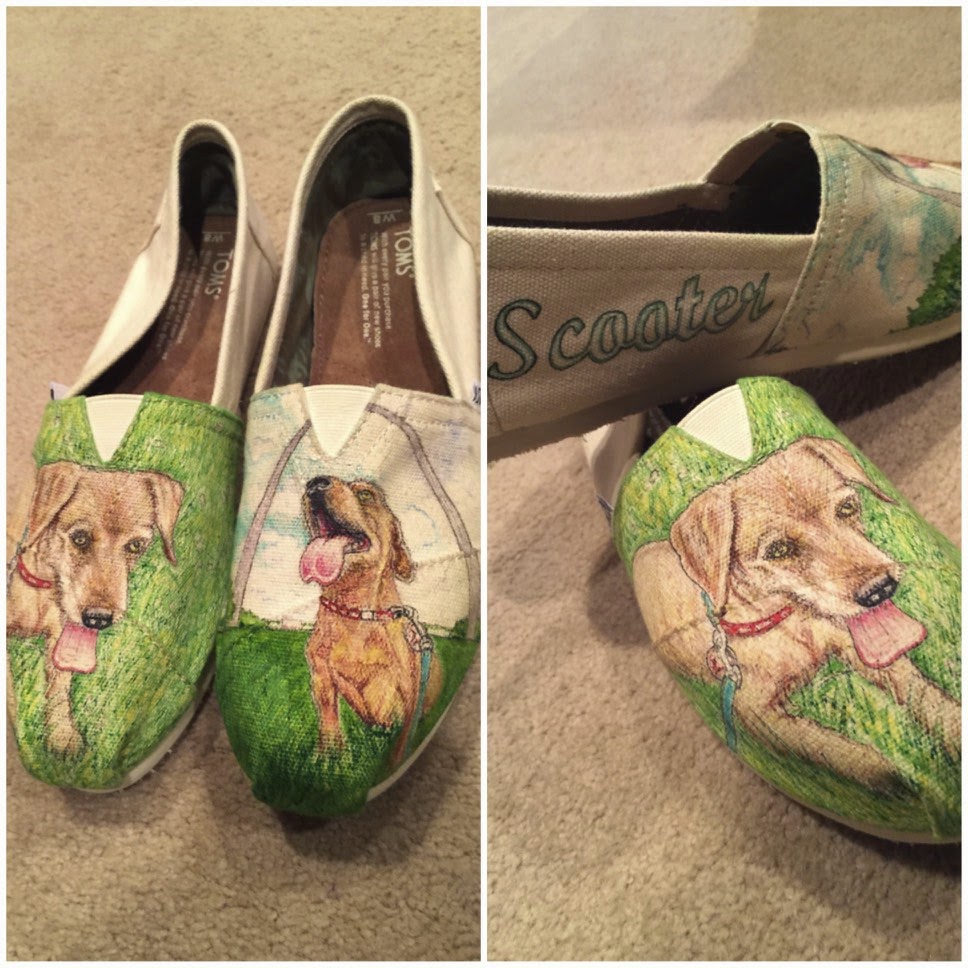 After an amazing dinner of homemade lasagna made by my momma, we had a delicious ice cream bar for dessert.  OMG.  It was amazing.  I could have eaten like 7 bowls of ice cream!  (But I stopped at one.  Got that glucose test in a couple weeks--gotta pass it!  Haha!) 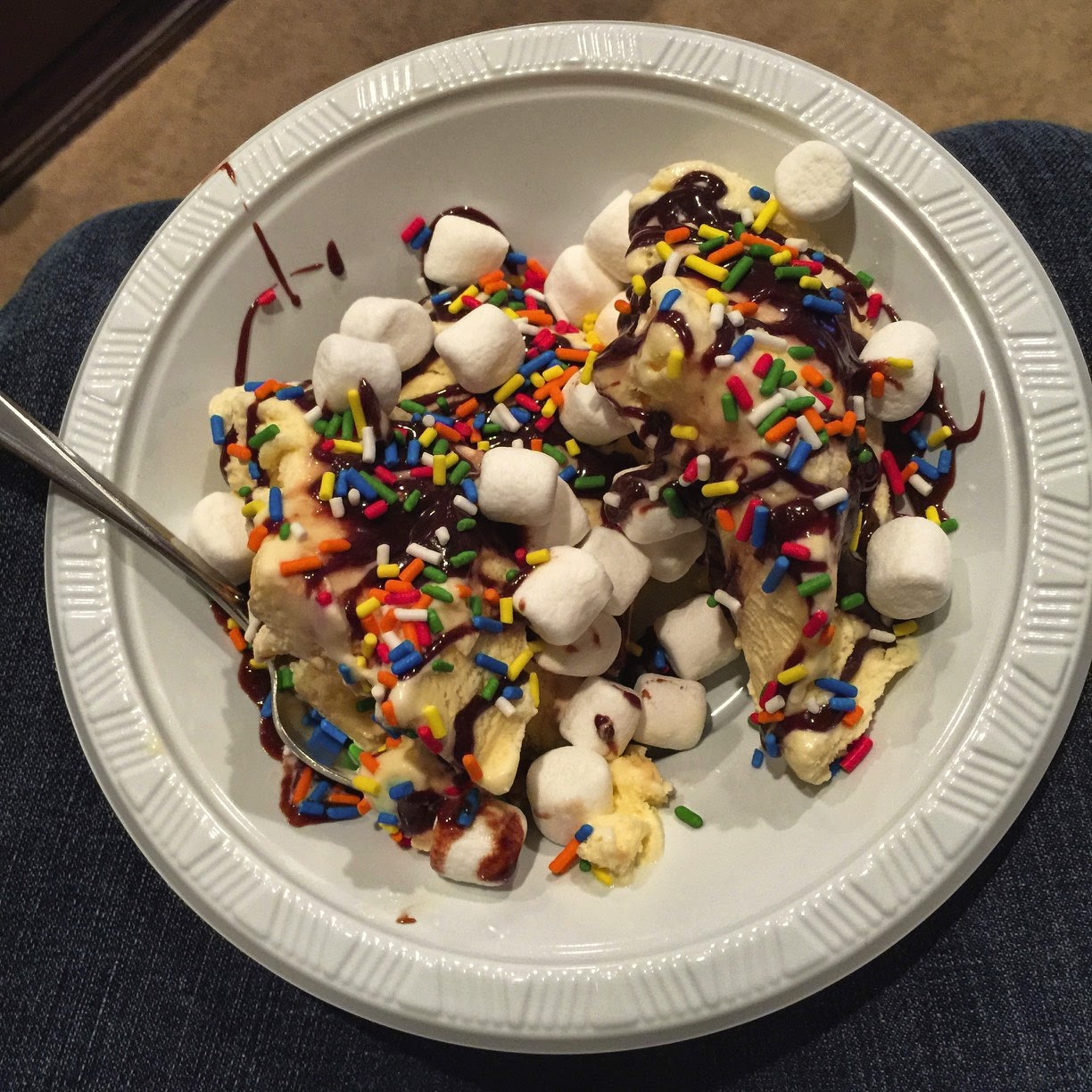 My mom decided it was time to recreate some pics from last year (ahhhh, now I see where I get the knack to do that from!), so we swooped up Patrick and recreated some shots from 2013. 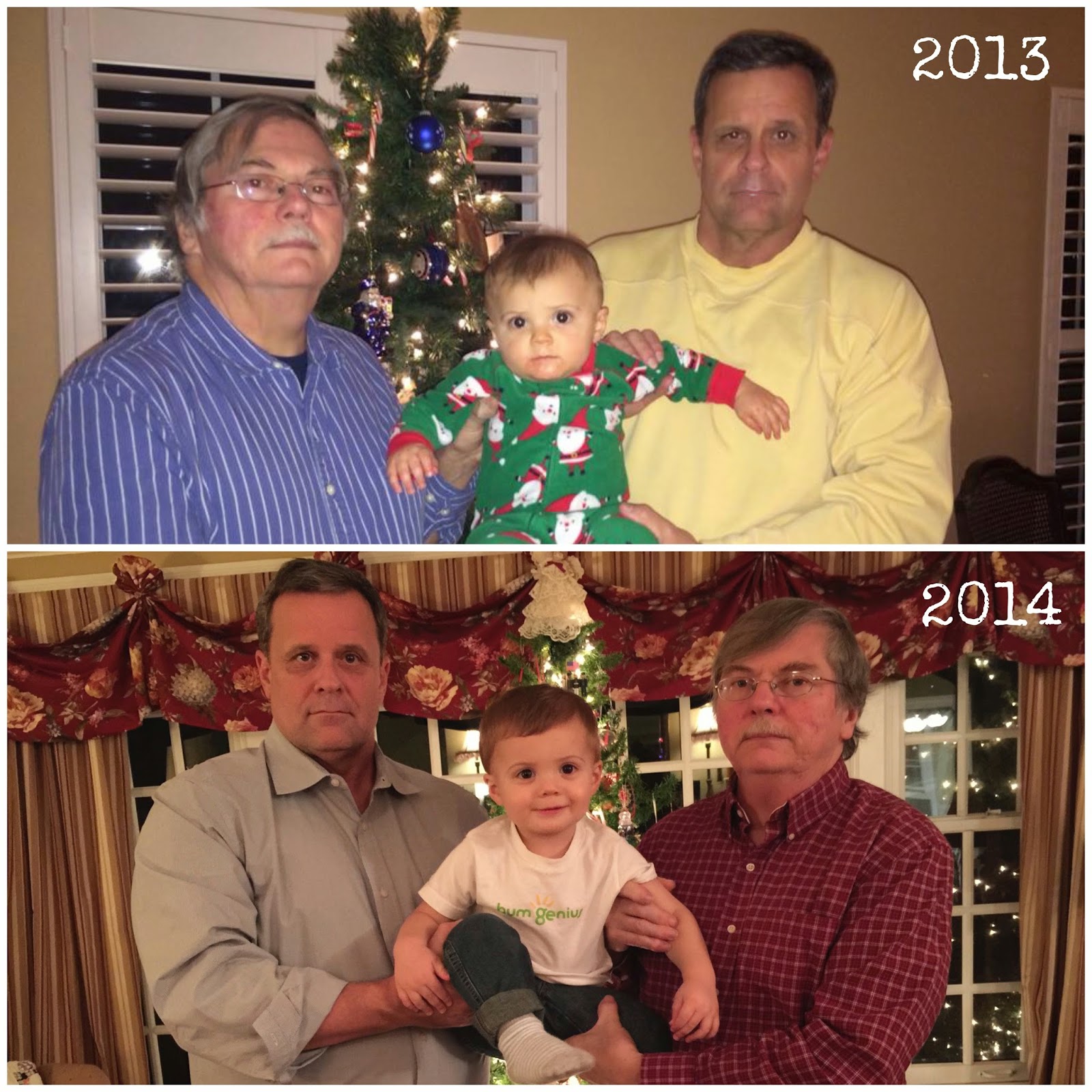 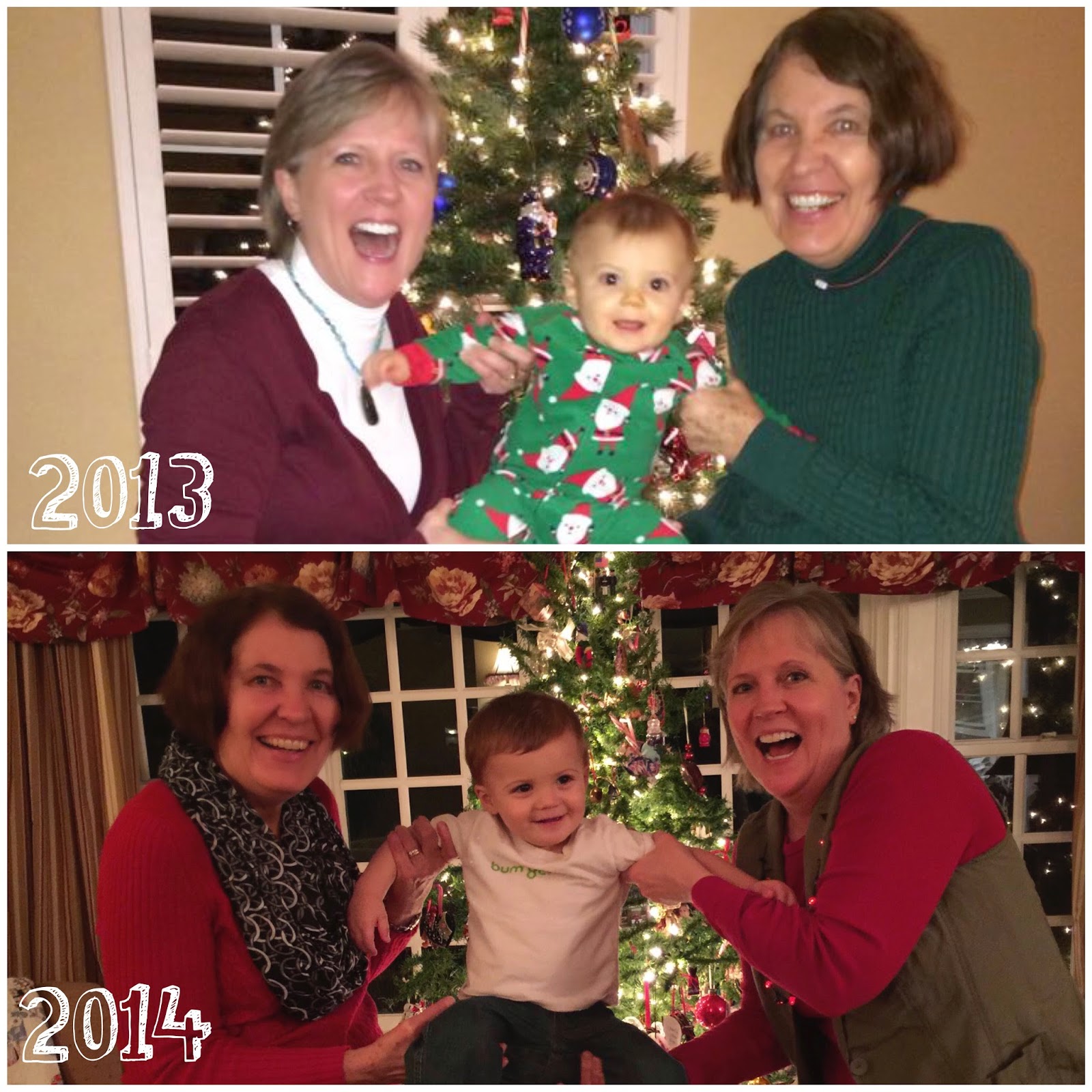 Of course then it seemed that everyone wanted to get their pic taken with Patrick, so we got some others pics with him as the prop as well.  Can you say little ham?!! 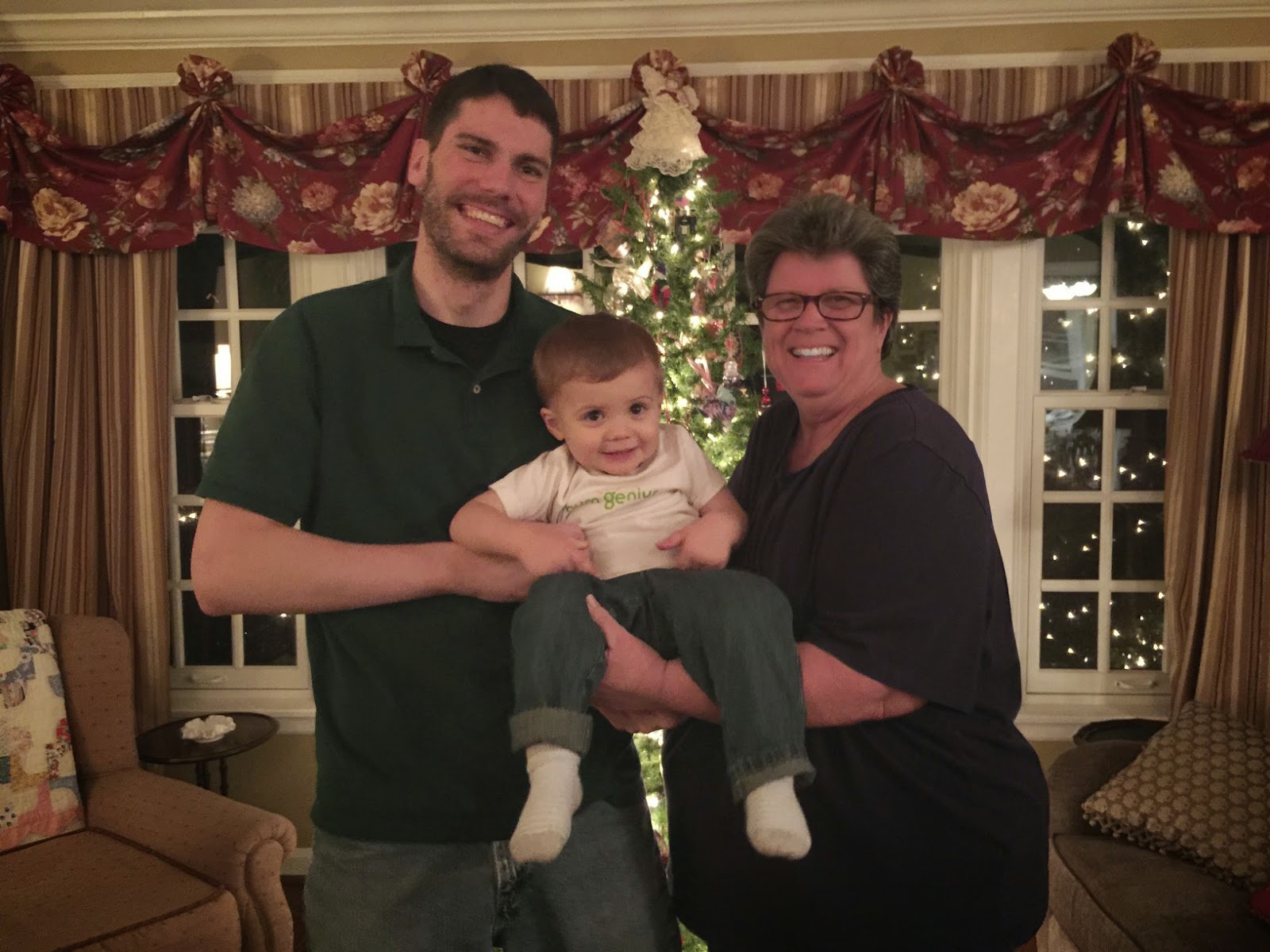 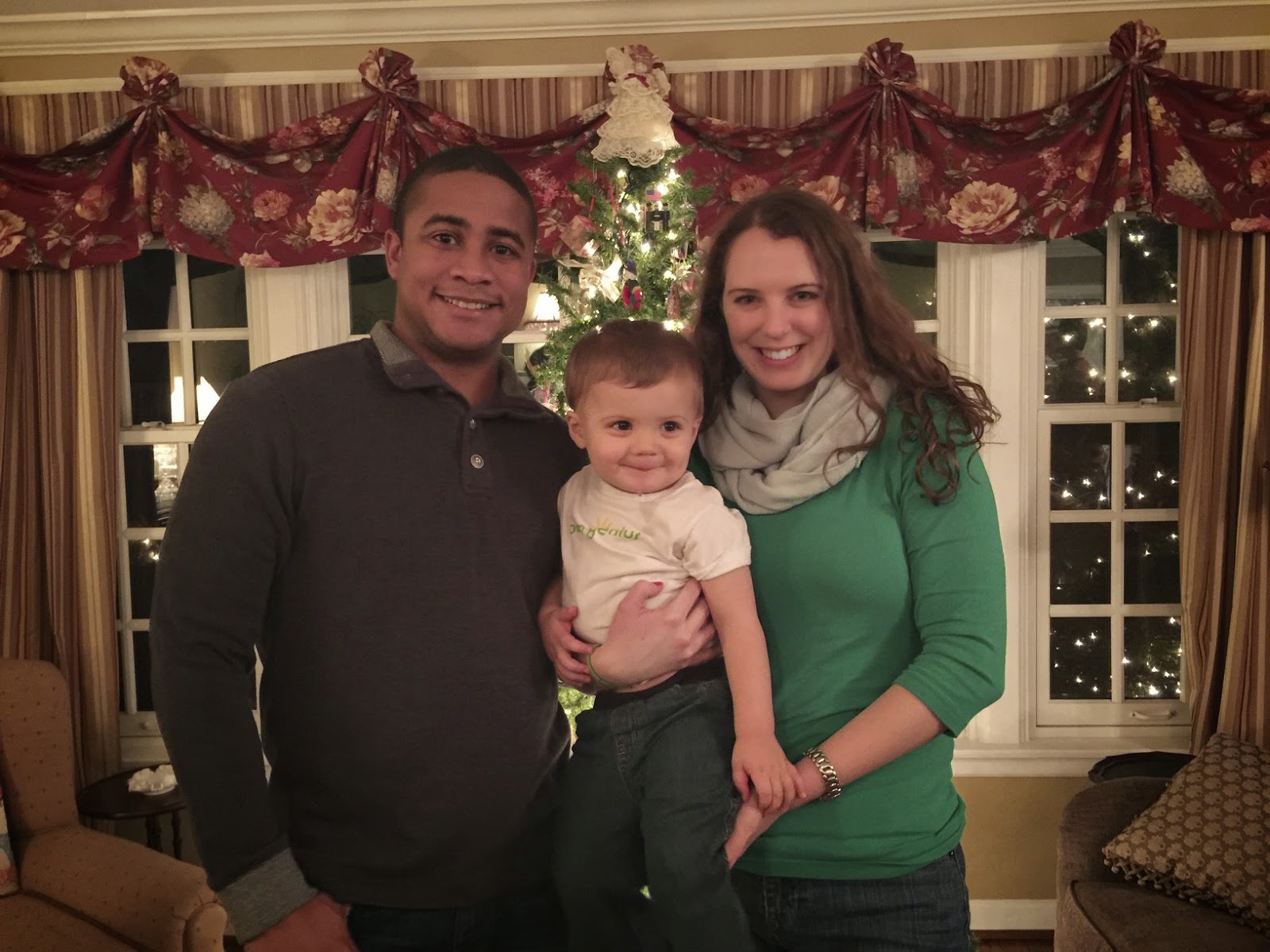 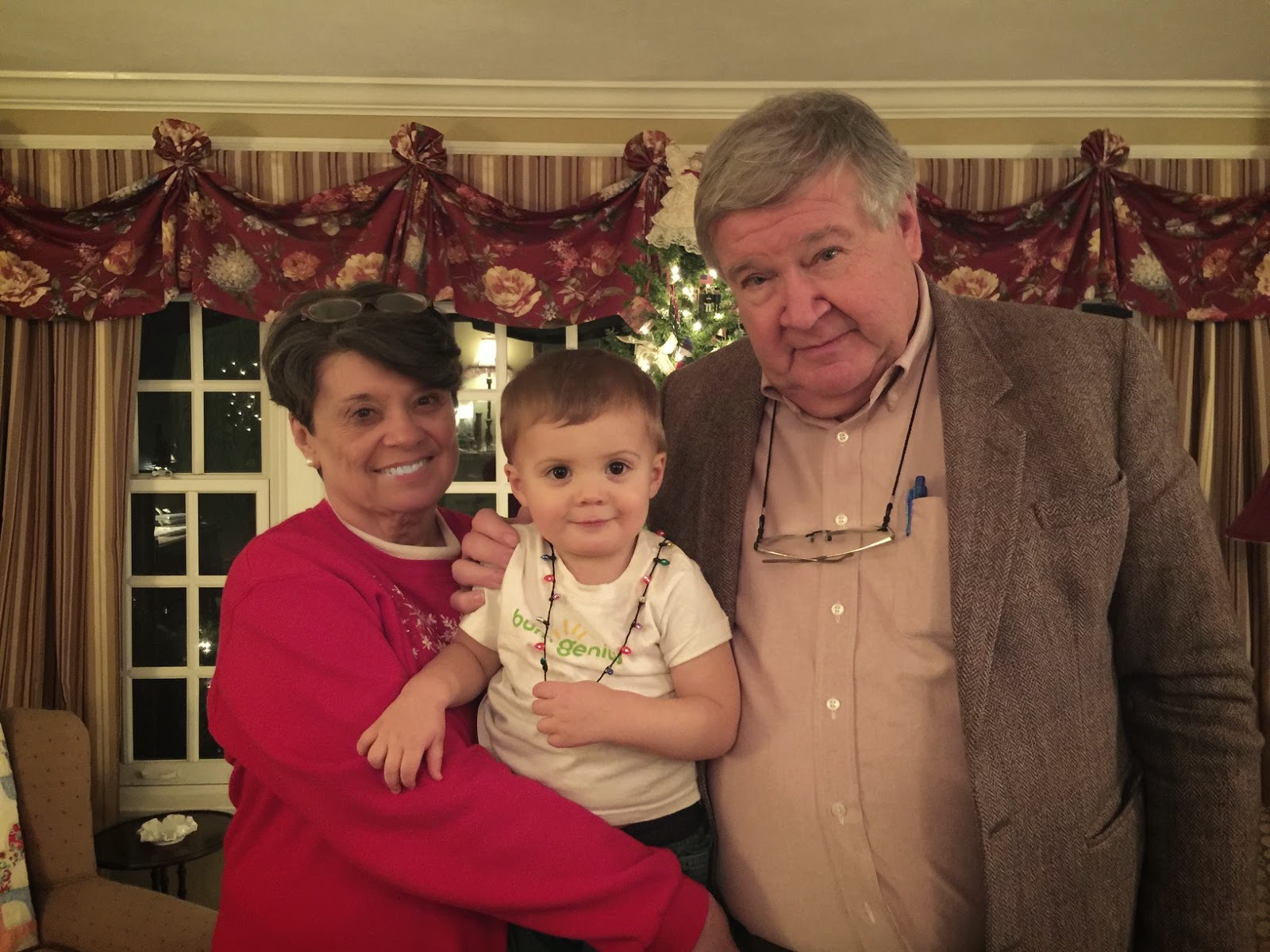 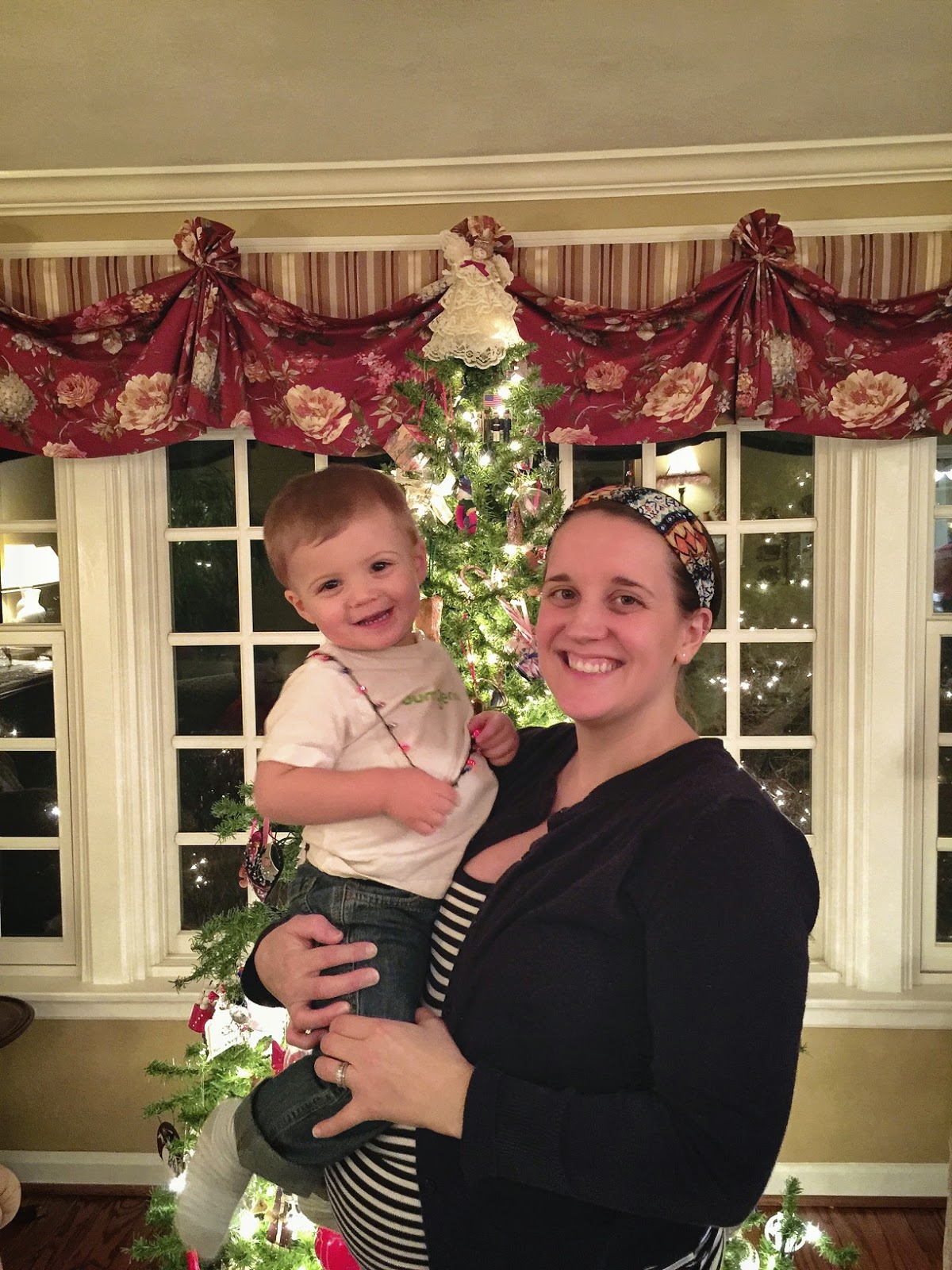 Patrick and I then headed home (we both were exhausted!) and he got a bath and went straight to bed!  Santa came early {again...second year in a row he's done that!} and I crashed.  I think Mike got off about 3:30am (very violent night in STL) and we all slept in until a little before 10am. 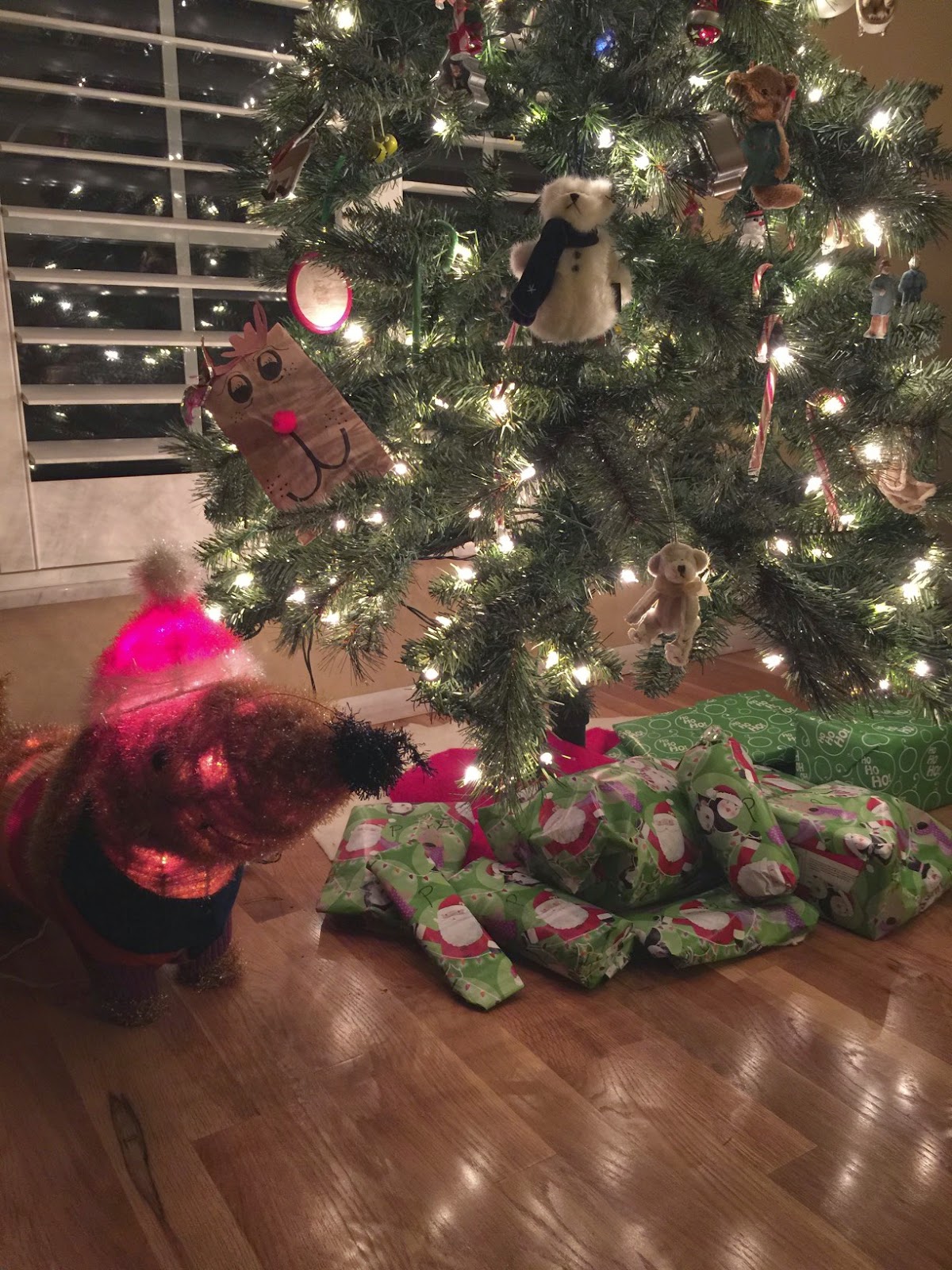 We then all got up and went to open presents!  This is where I think Patrick will really "get it" more next year.  He didn't really understand that Santa was coming and what not, and then in the morning he'd open a present and want to just play with that--not realizing he had a ton of other presents to open as well! 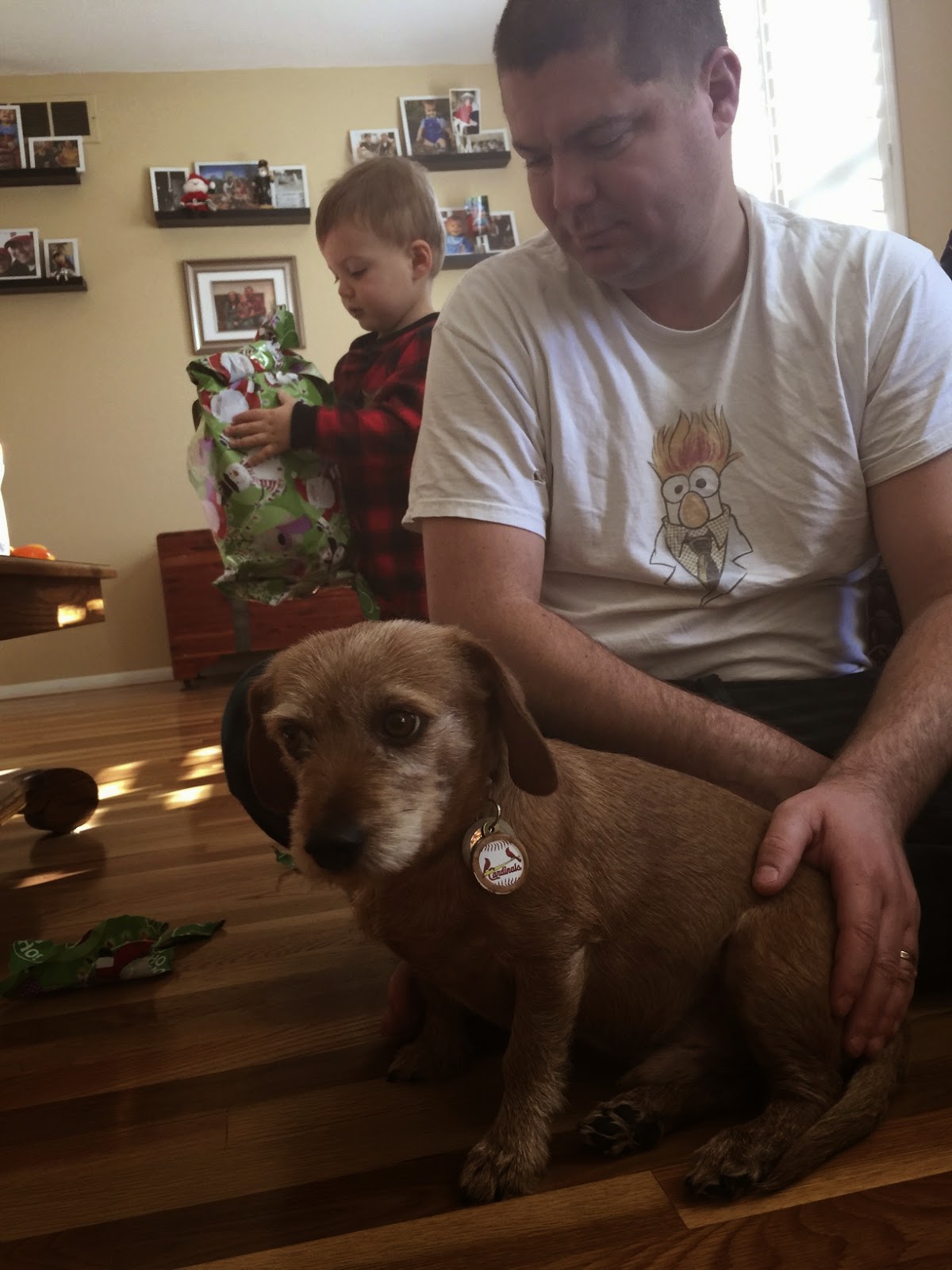 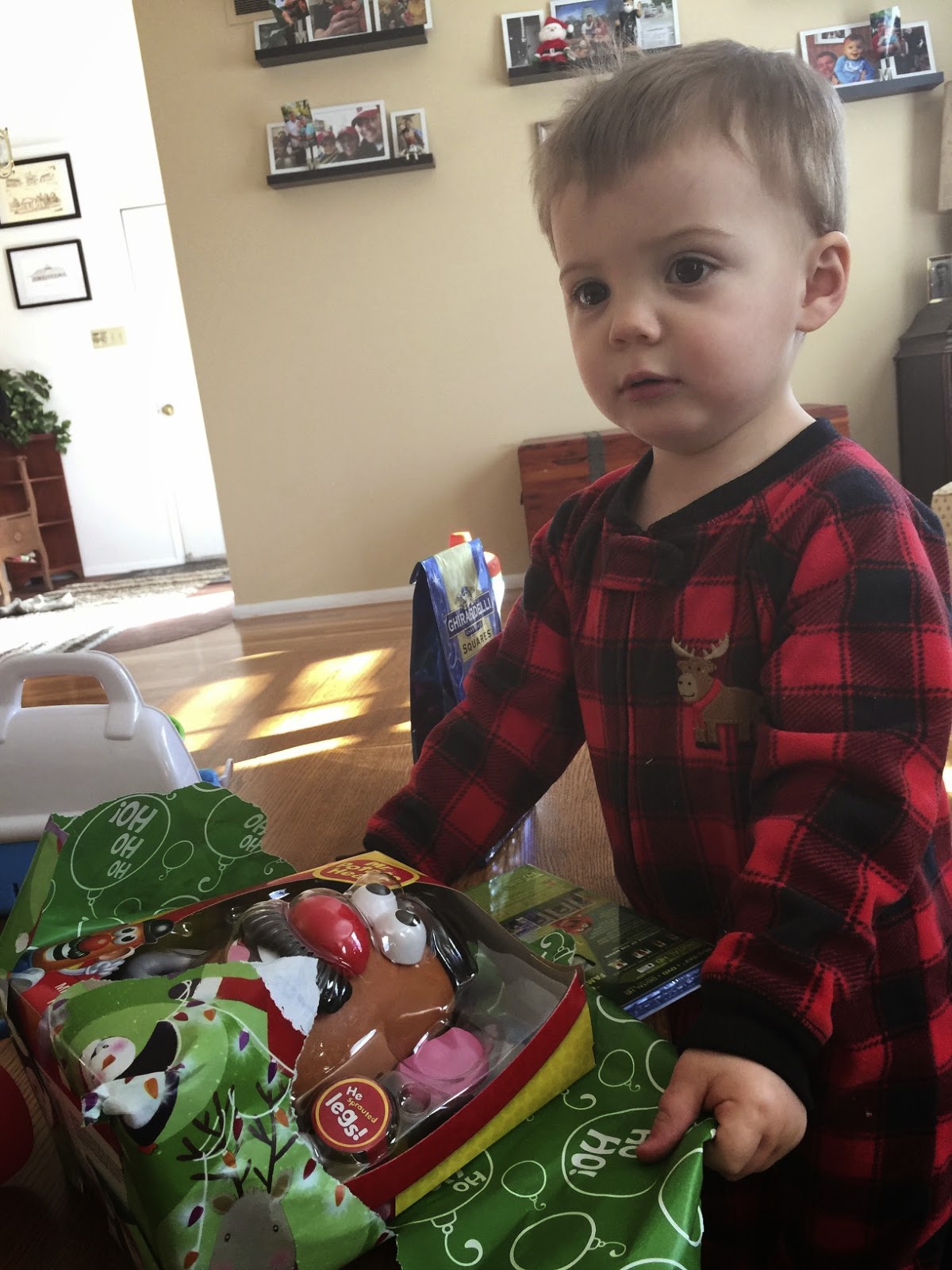 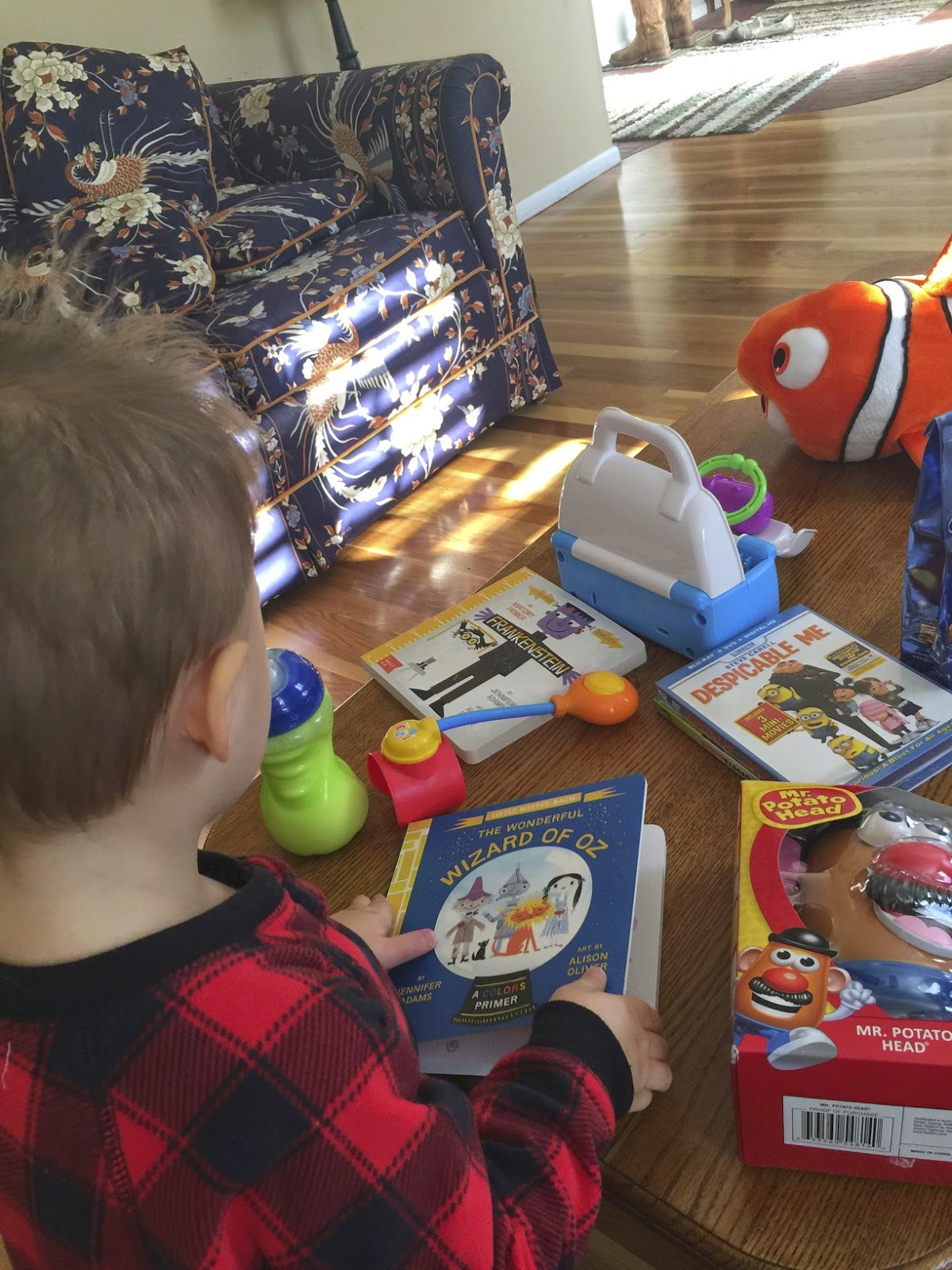 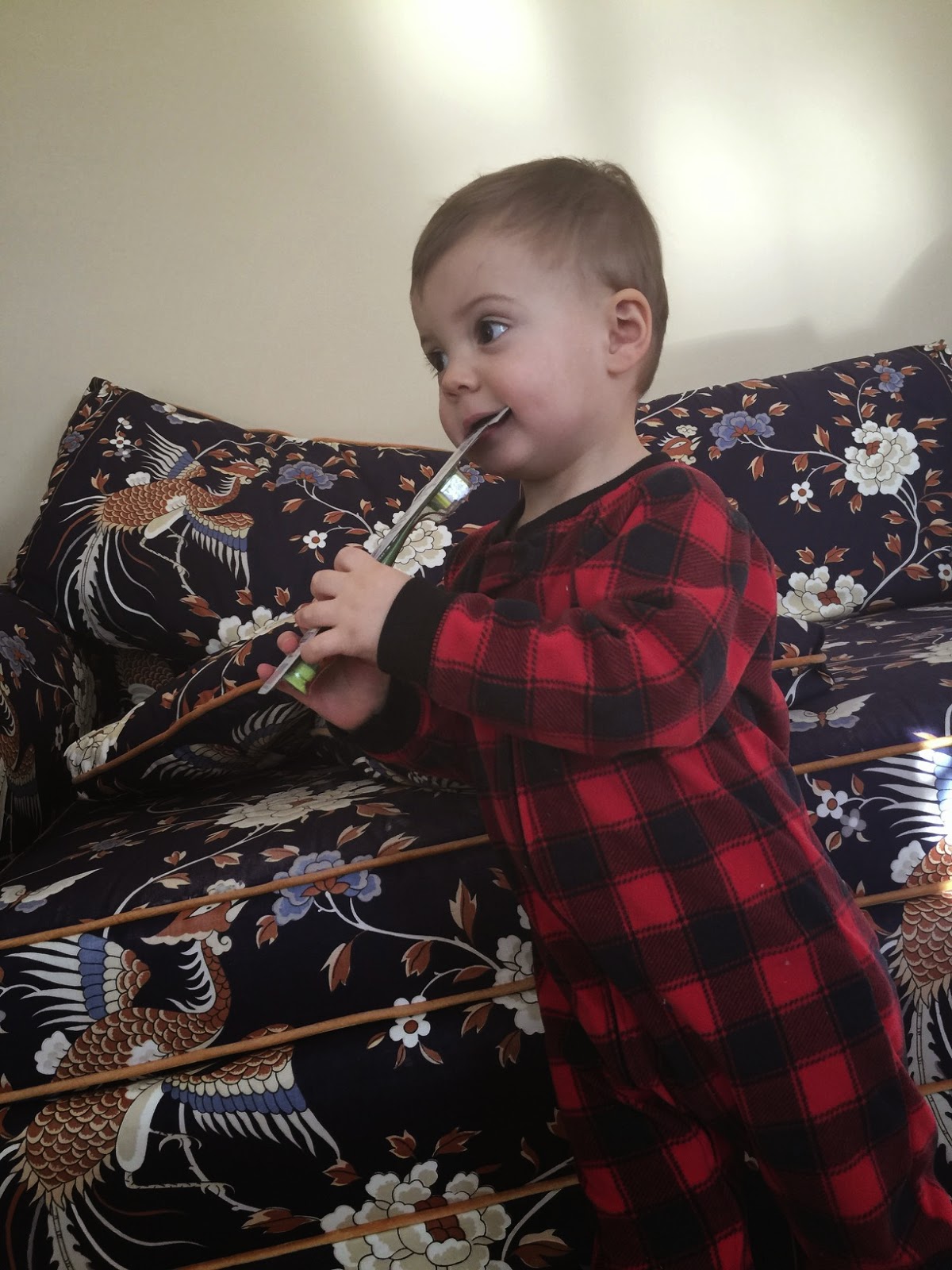 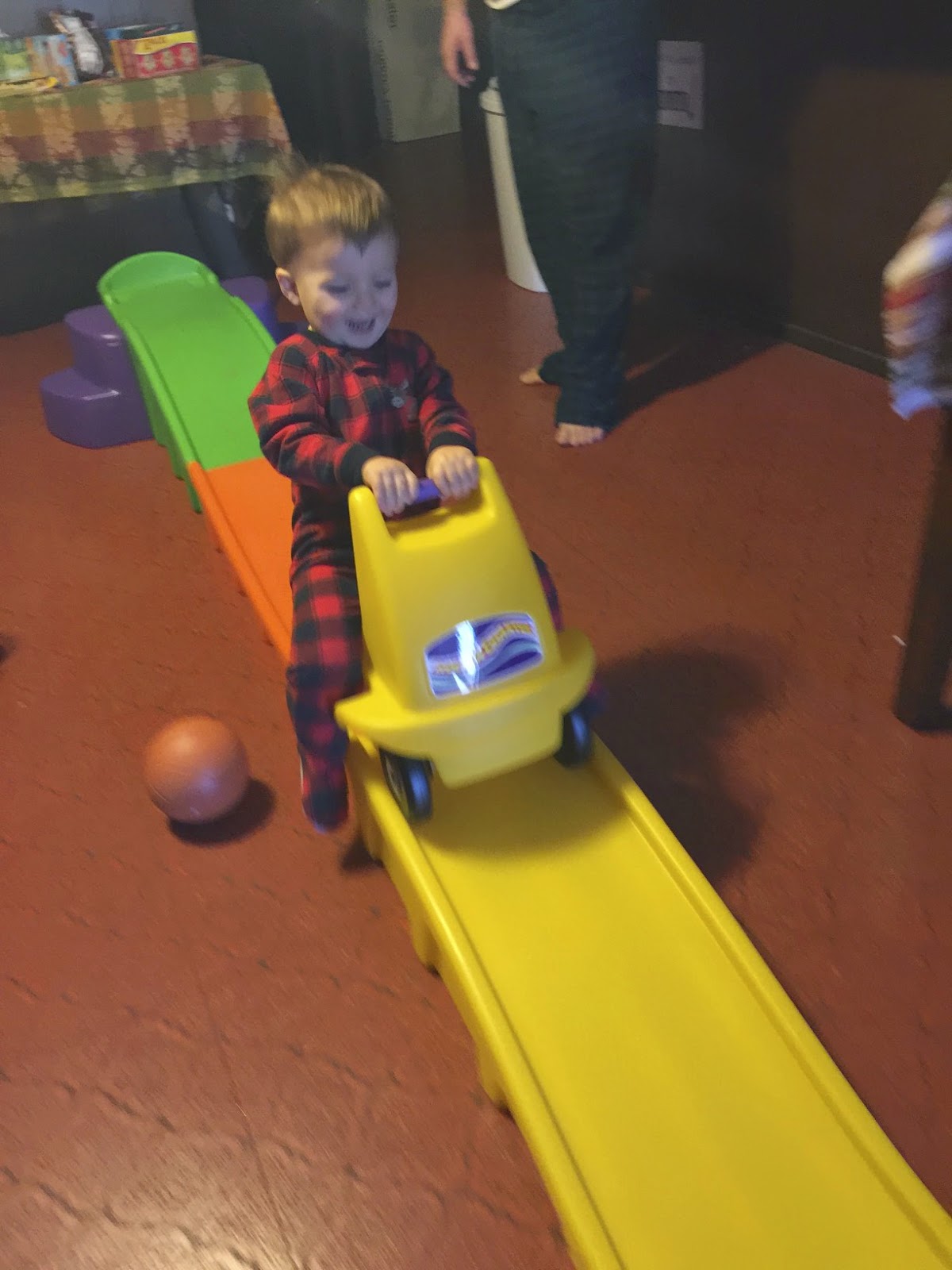 Patrick got a ton of great stuff--some new books, Dinosaur Train shirt and toothbrushes, a giant Nemo stuffed animal, Mr. Potato Head, and, probably his favorite, a rollercoaster he can ride in the basement!

It was a great morning and I'm so glad Mike was able to be there with us.  Mike got Reno 911!  The complete series on DVD, a couple other movies, some chocolates, an a Muppets encyclopedia.  I got a new Canon backpack for my camera and gear, tickets to see The Book of Mormon when it comes to STL next month, and a prenatal massage!  EKKK!  I'm so excited about those! 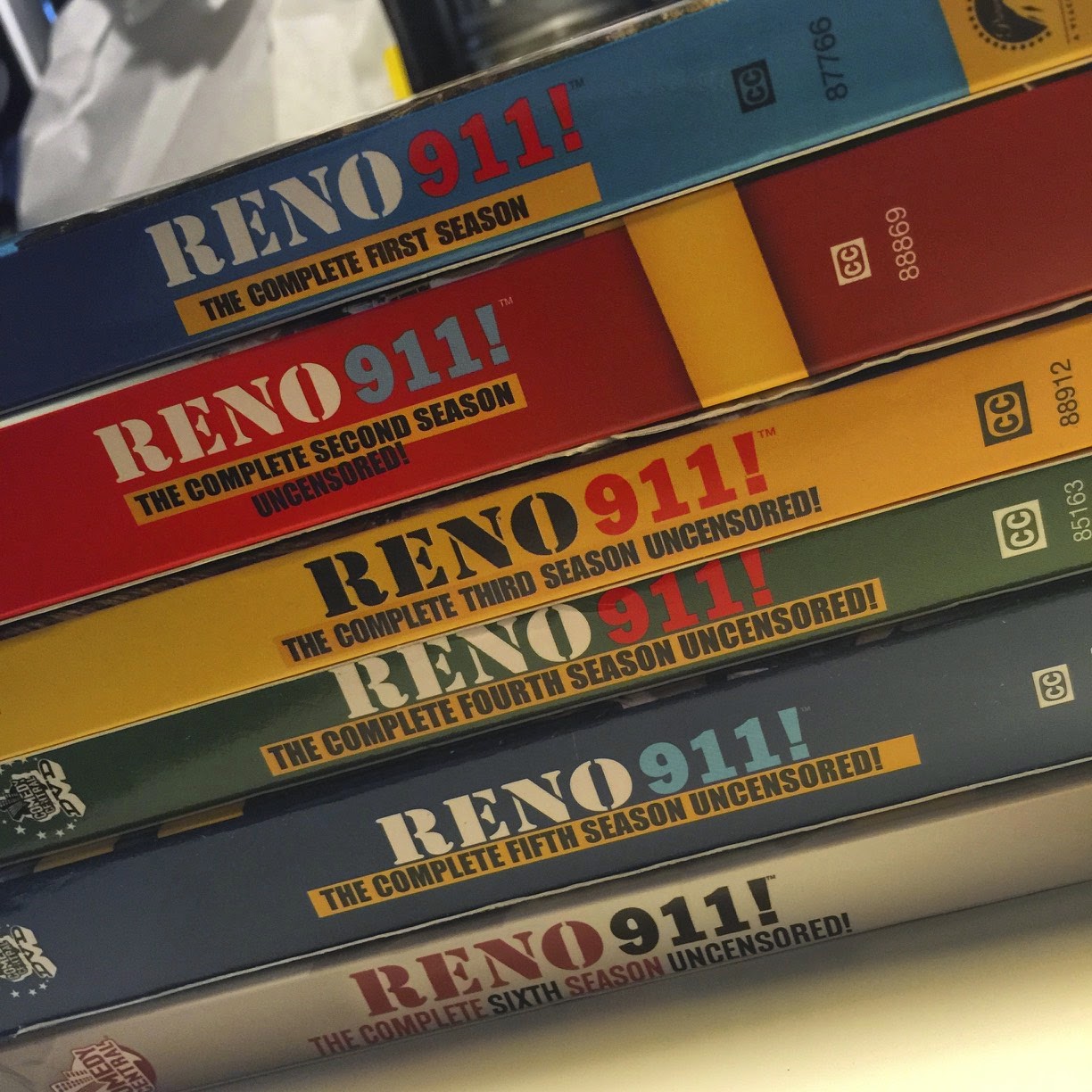 We then had to head out to my uncle's for family brunch with my mom's side of the family.  As much as I love the holidays and Christmas, I felt like we were racing around ALL.DAY.LONG.  We didn't stay too long after brunch was served at my uncle's cause Mike had to get to work and Patrick had to take a siesta. While he was snoozing I got some Christmas stuff put away (I know, I know, I'm a grinch) and stuff packed for our upcoming trip to Florida.  I also dug out my holiday shirt to wear the rest of the day, cause I'm 25 weeks pregnant on the 25th!  How appropriate, right?! 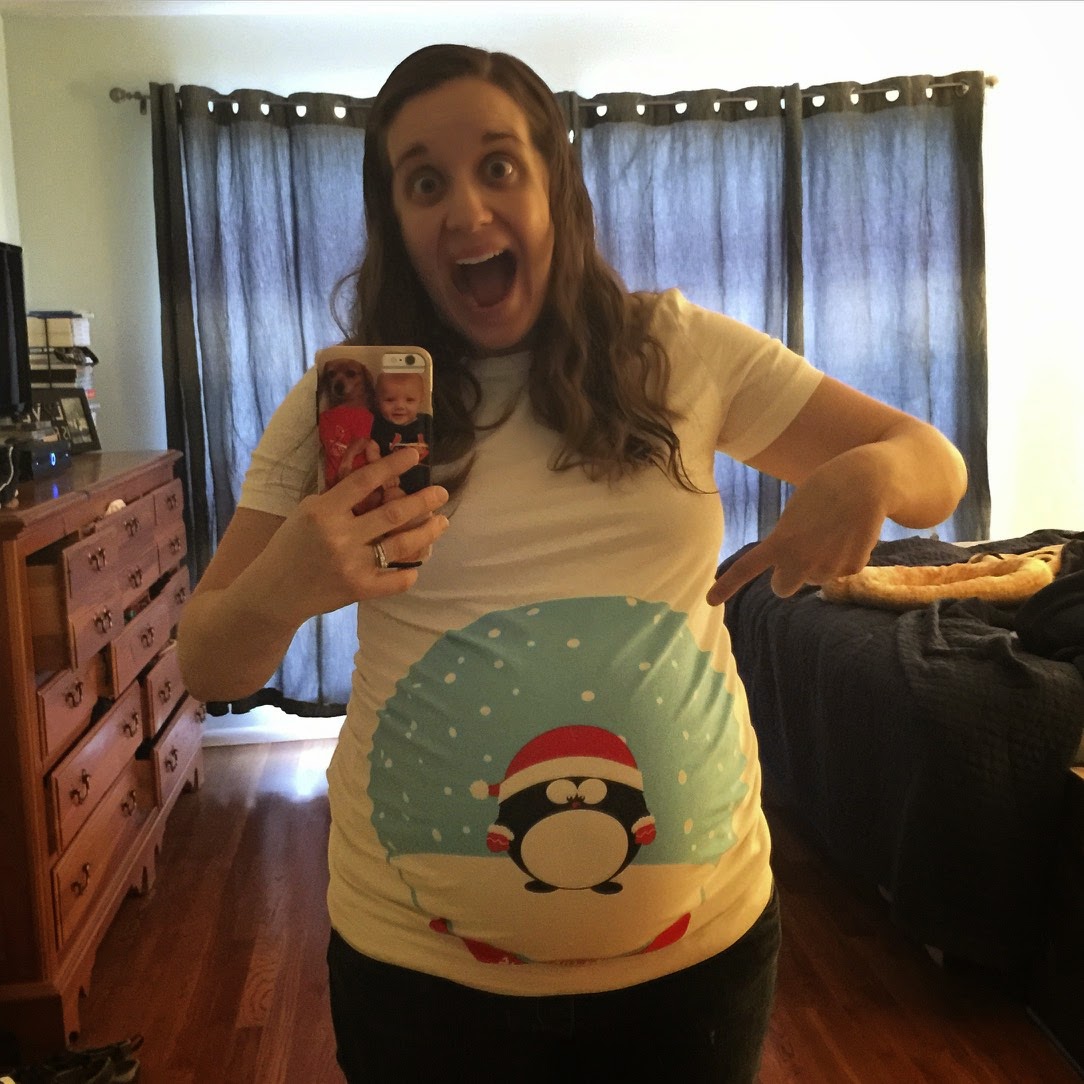 And as soon as Patrick woke up (or I woke him up!) from his nap, we headed out to Mike's aunt and uncle's house (sans Mike, boo hiss) for our last Christmas soiree of the season.  Patrick had to bring Nemo with him as well. 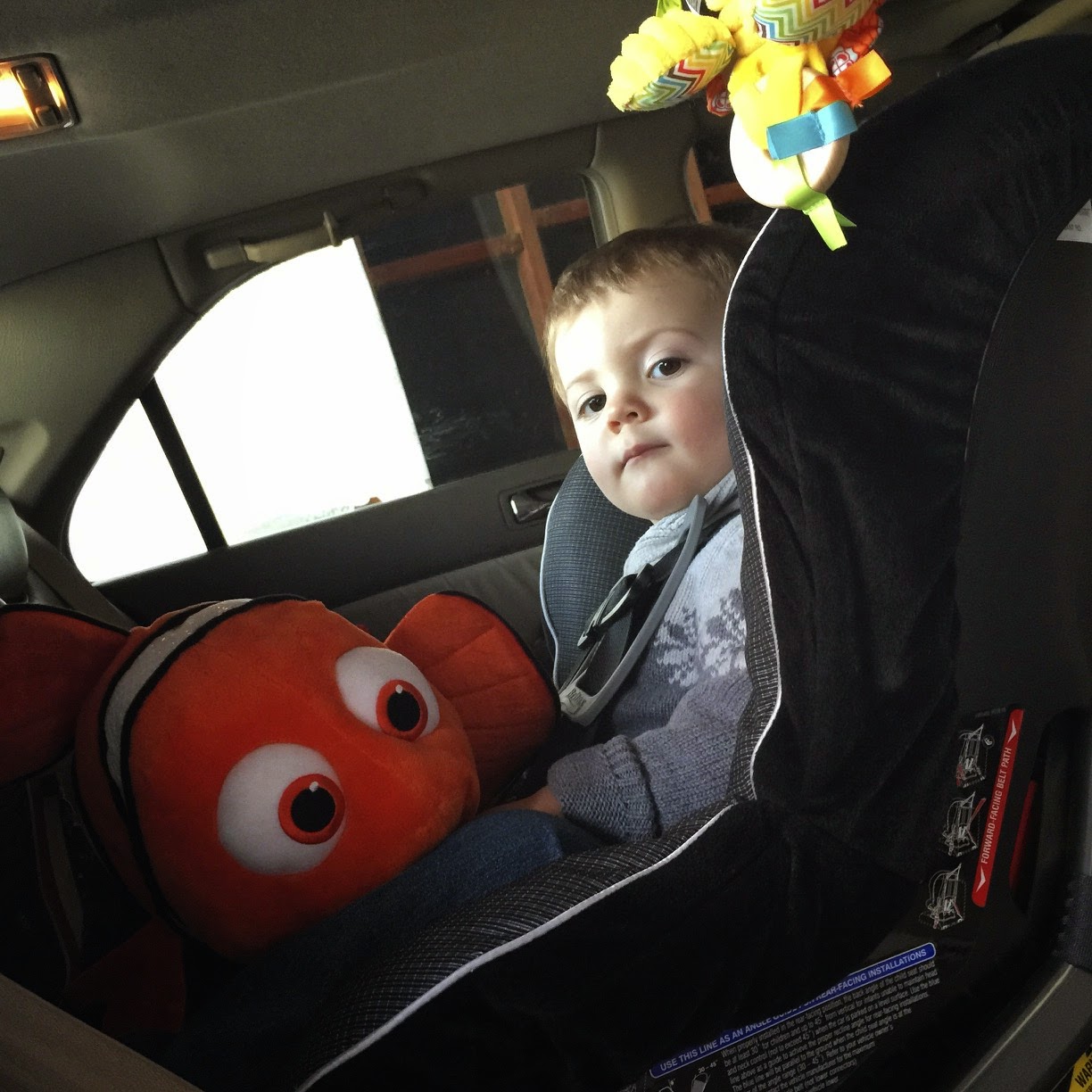 We had a great time at the Dittrich's house...lots of playing and showing off for Patrick, and a lot of sitting for me (gahhh, I'm so tired lately--these long days of Mike working wayyyyyy late are wearing on me!).  Patrick had a blast though, and got a lot of playtime in with his cousin Lizzy.  How freaking cute is their hugging pic?!!  Seriously.  I die.  That was totally, "Patrick, go give Lizzy a hug" and that's what ensued.  So.darn.cute. 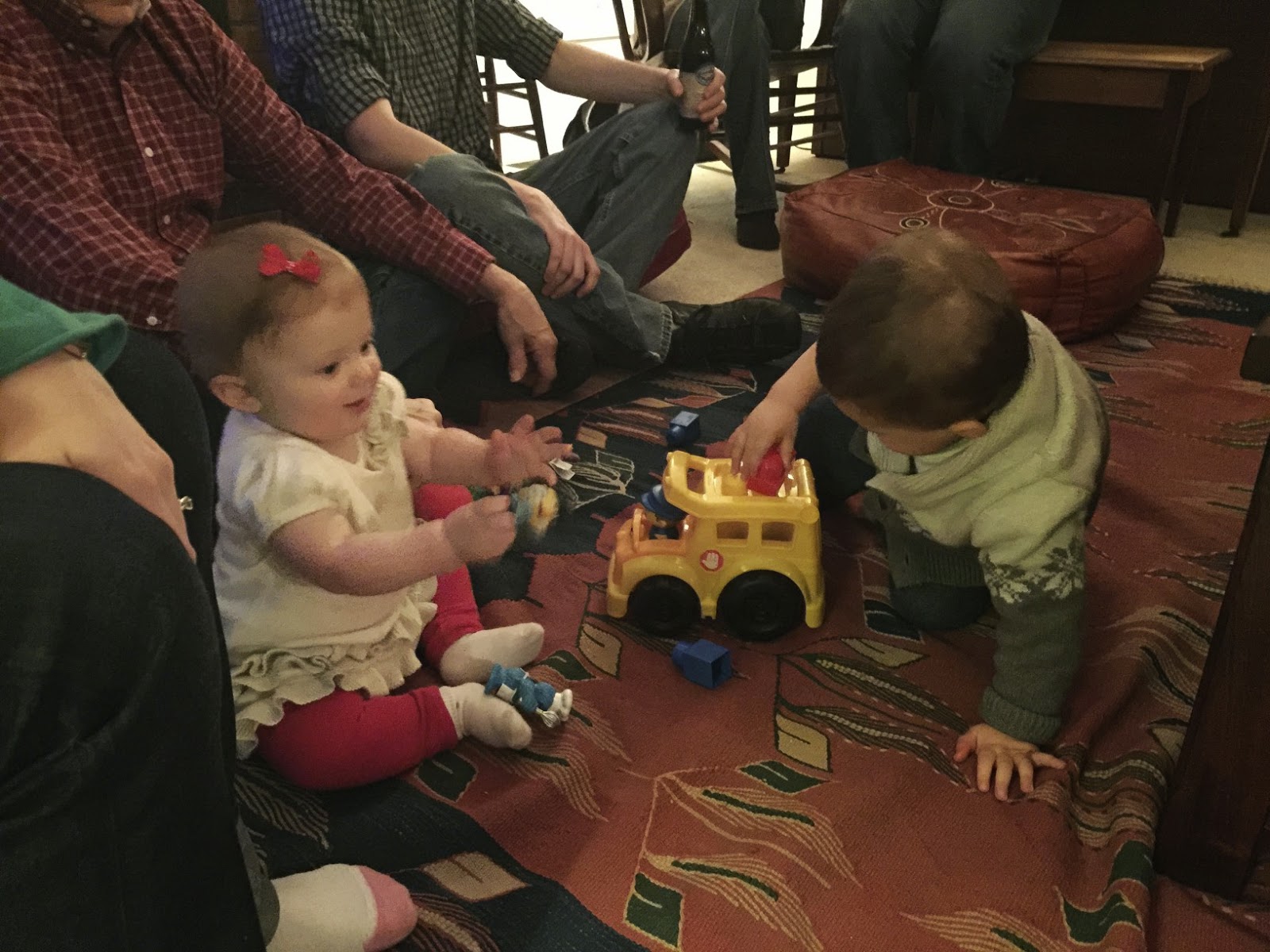 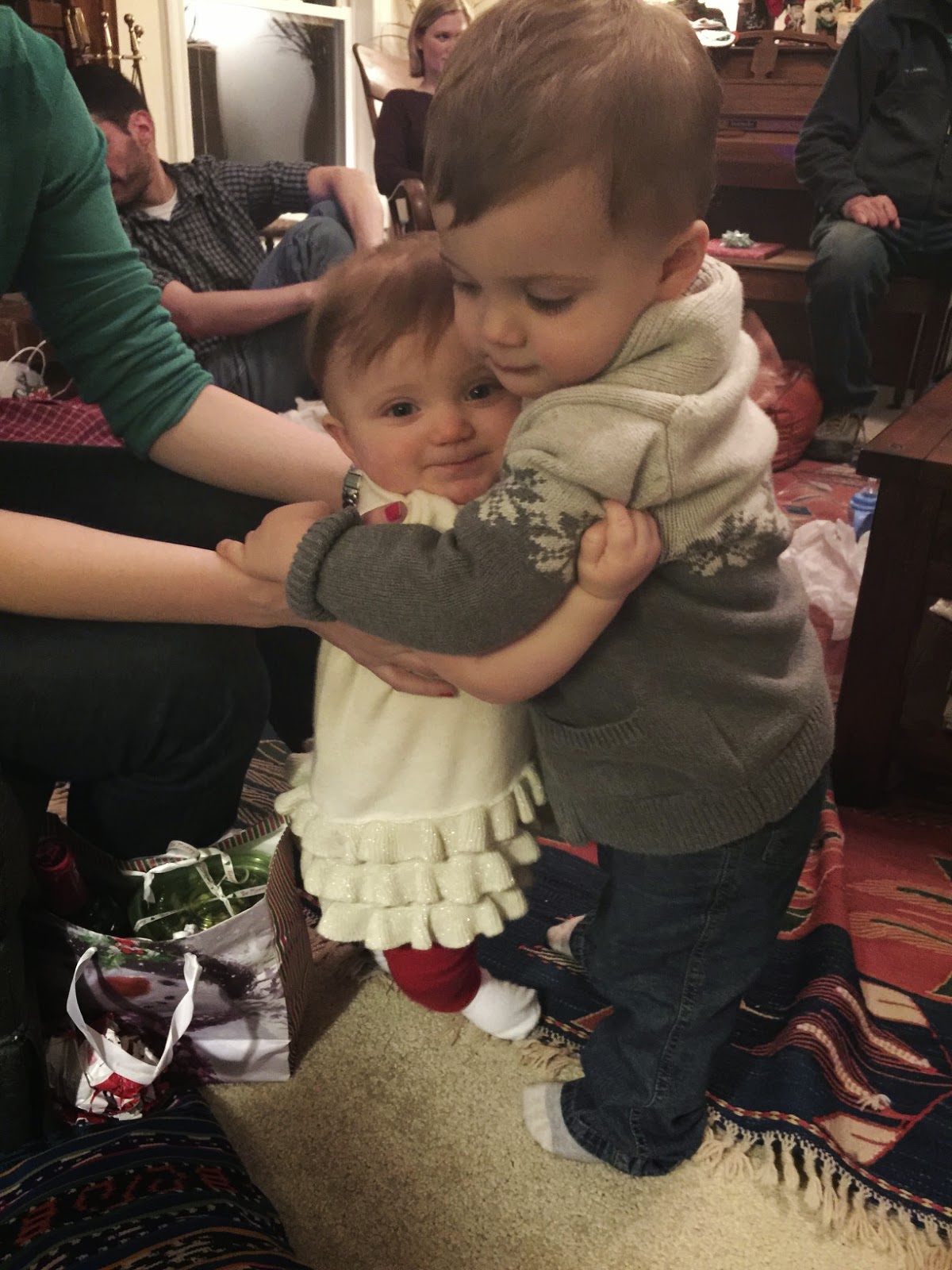 And now Christmas is almost over as I sit here typing this and reflecting on our past couple days and how blessed and lucky we are to have such great family and friends.  I hope everyone out there had a fantastic Christmas and holiday season and I hope 2015 brings great things to you!  I KNOW it will for us! :)
Posted by Alexandria Mooney at Thursday, December 25, 2014