This was a big weekend for the Mooneys: it was our first official trip away without taking Patrick!  He has definitely spent the night away from us on several occasions; having a'many sleepovers with both sets of grandparents, but never for more than one night...so being gone for FIVE nights from him was a big deal.

Mike and I got invited to a wedding in New Orleans wayyyyyy back around Christmas time.  As soon as we got the Save the Date, we started talking about making a long weekend out of it, because conveniently Mike already had the weekend off so he'd just tag an extra day or two onto it to make it a nice long weekend.  Our good friends Adam and Sarah were gung-ho about going too, so we started talking with them about 6 months ago about making this a little weekend getaway, with a wedding to end the trip.

Right around the time the invites were due, Sarah said she scored a super amazing deal for 3 nights of hotel rooms right across the street from the French Quarter for super-duper cheap, so we jumped on those, and committed to going.  Since the Mooneys love to drive anywhere, we decided we'd drive to New Orleans--and also so we could stop by and see some friends who just moved to Mississippi on the way home--more on that later.

So I have this irrational fear that whenever I leave Patrick, especially for a long weekend like this that we've never done before, I think he's going to forget all about me.  Yes, super irrational, I know, but I can't help it.  It's the mommy-guilt in me I guess, thinking that he's going to punish me for not taking him with us by ignoring me upon our return.  Sheesh.  I need to get over that.  Thank God for FaceTime though. 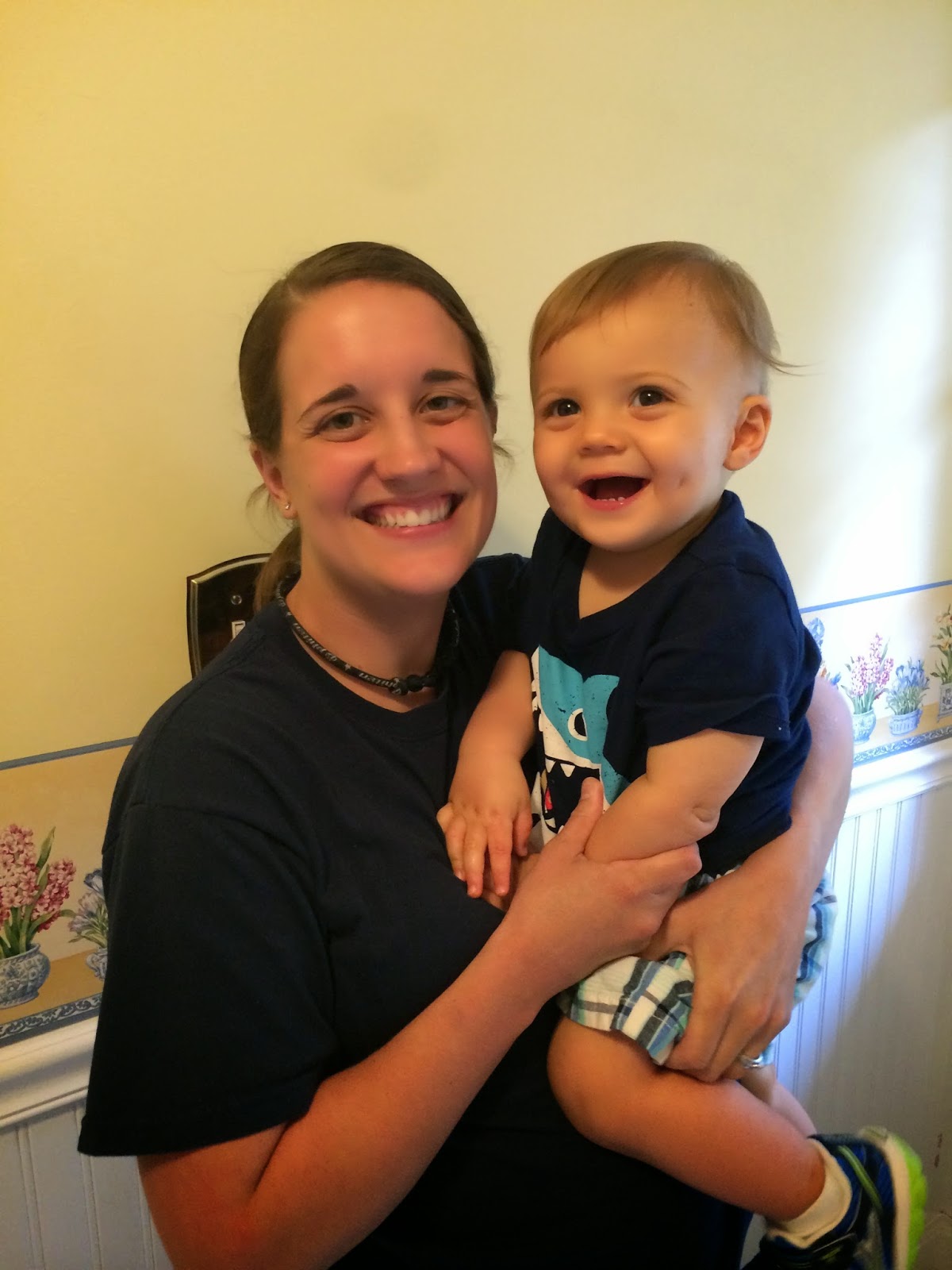 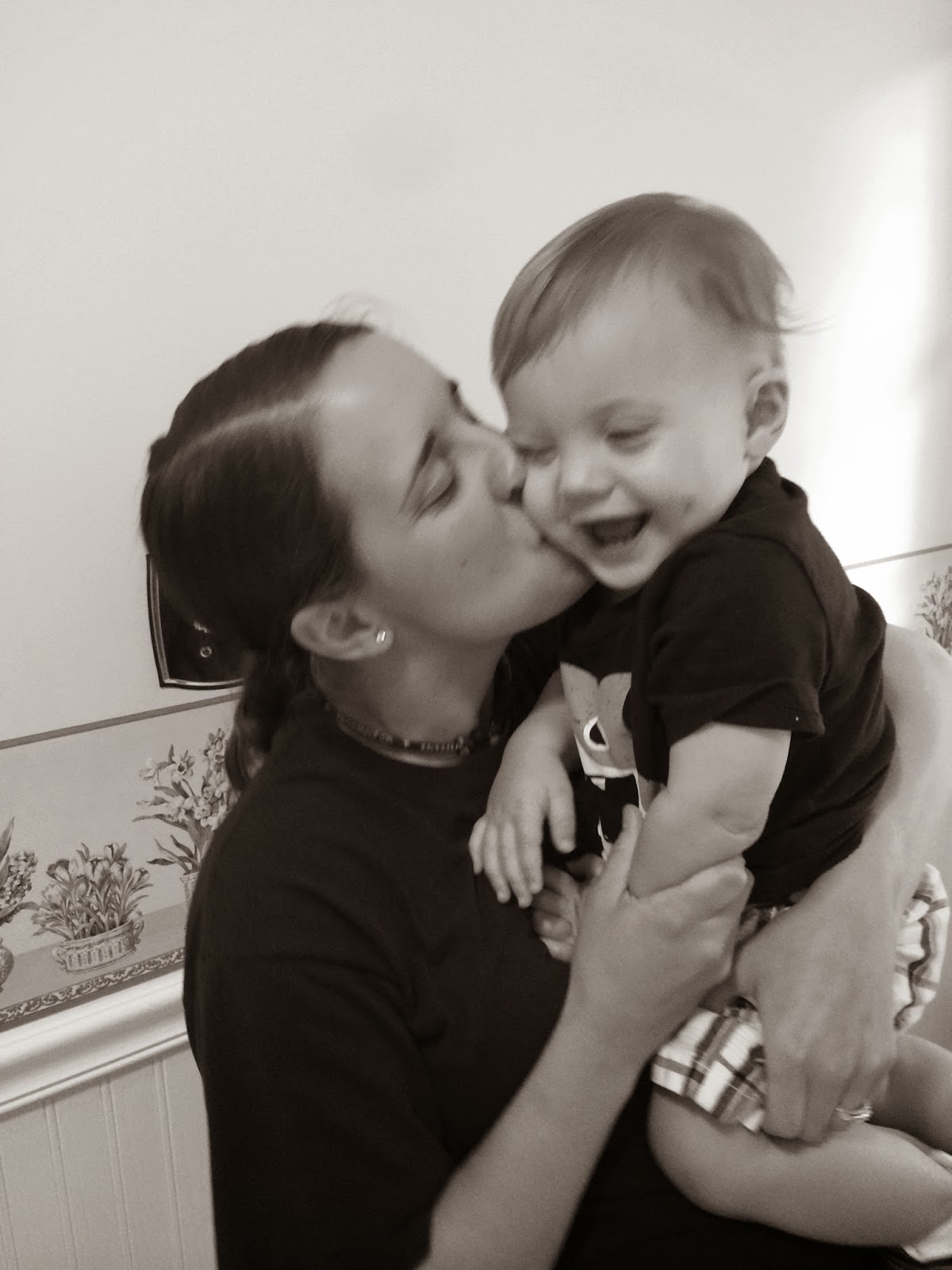 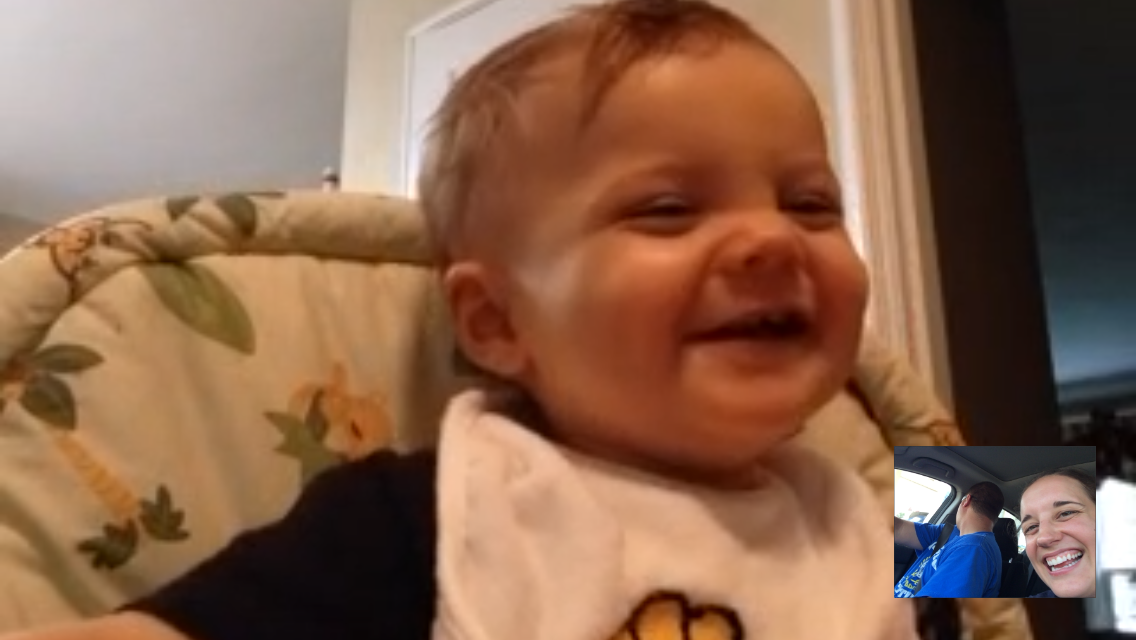 Anyways, so after a few snuggles and squeezes with my boy, I left him (Mike had to work) at Gammie and Gramps' house (for the first few nights, then they had a "drop off switch" at Grandma and Grandpa Mooneys for the last couple nights) and I went home and went to bed, since we were planning on getting up at 4am to leave.  Wellllllll, wouldn't you know it?  Mike was suppose to get off at 11pm, but instead got home at 2am because he got caught up on a homicide.  I think he was asleep for a total of 56 minutes before I woke him up and told him "time to go!".  Yeah, so guess who drove 90% of the way down to NOLA?!  This girl.  Which I'm actually super proud of myself for doing because I usually make Mike drive so I can sleep/eat/play on my phone/read a book without getting carsick. 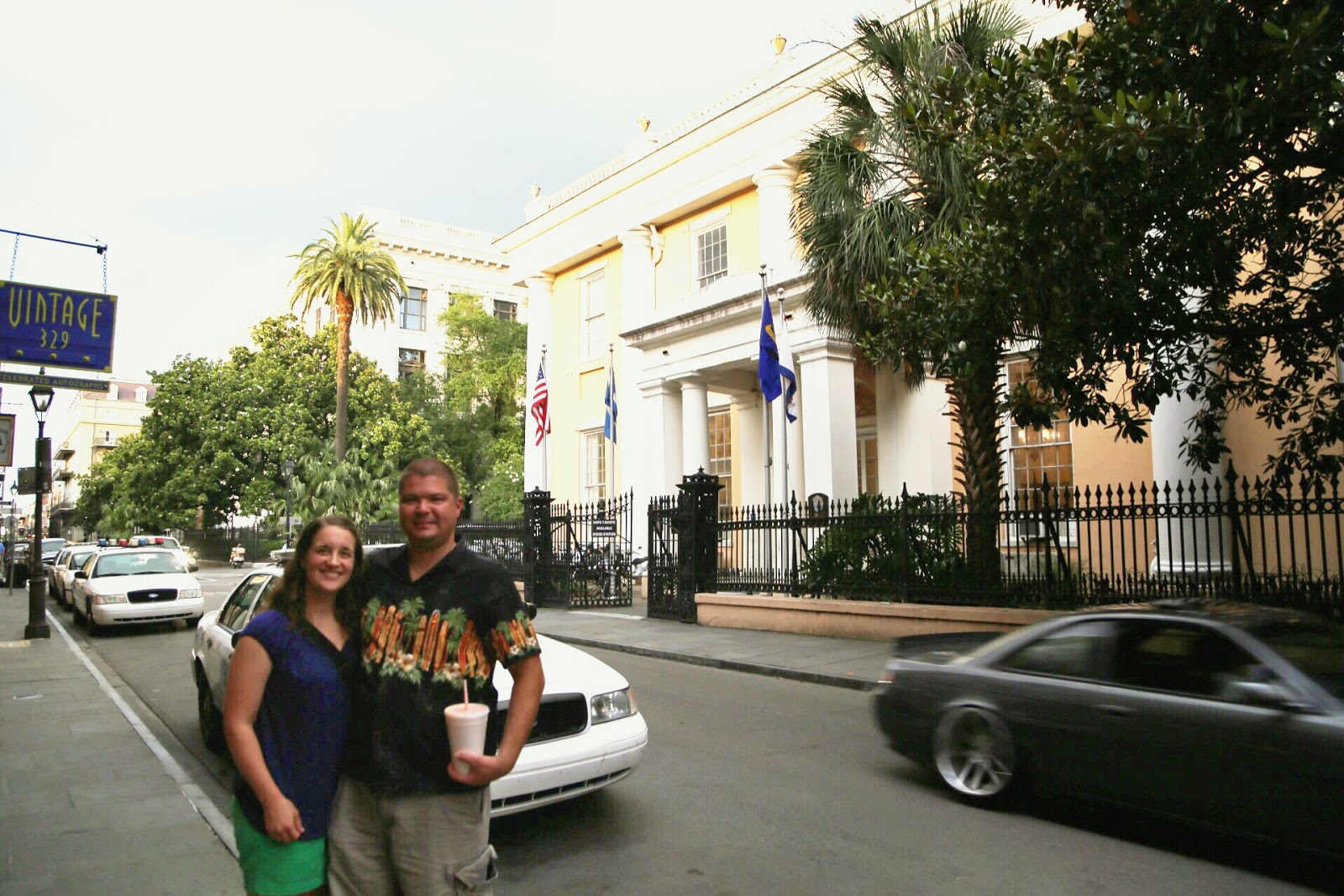 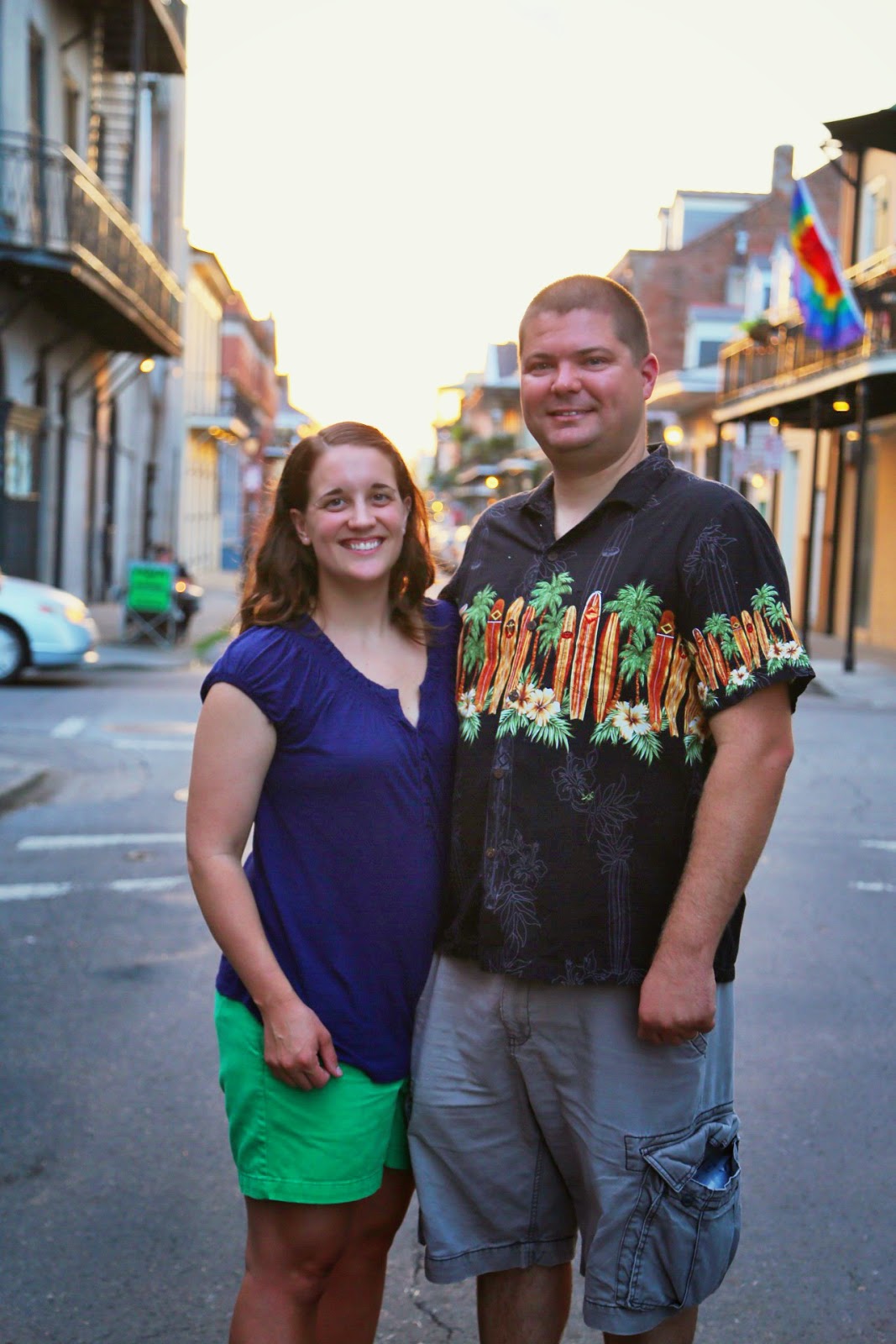 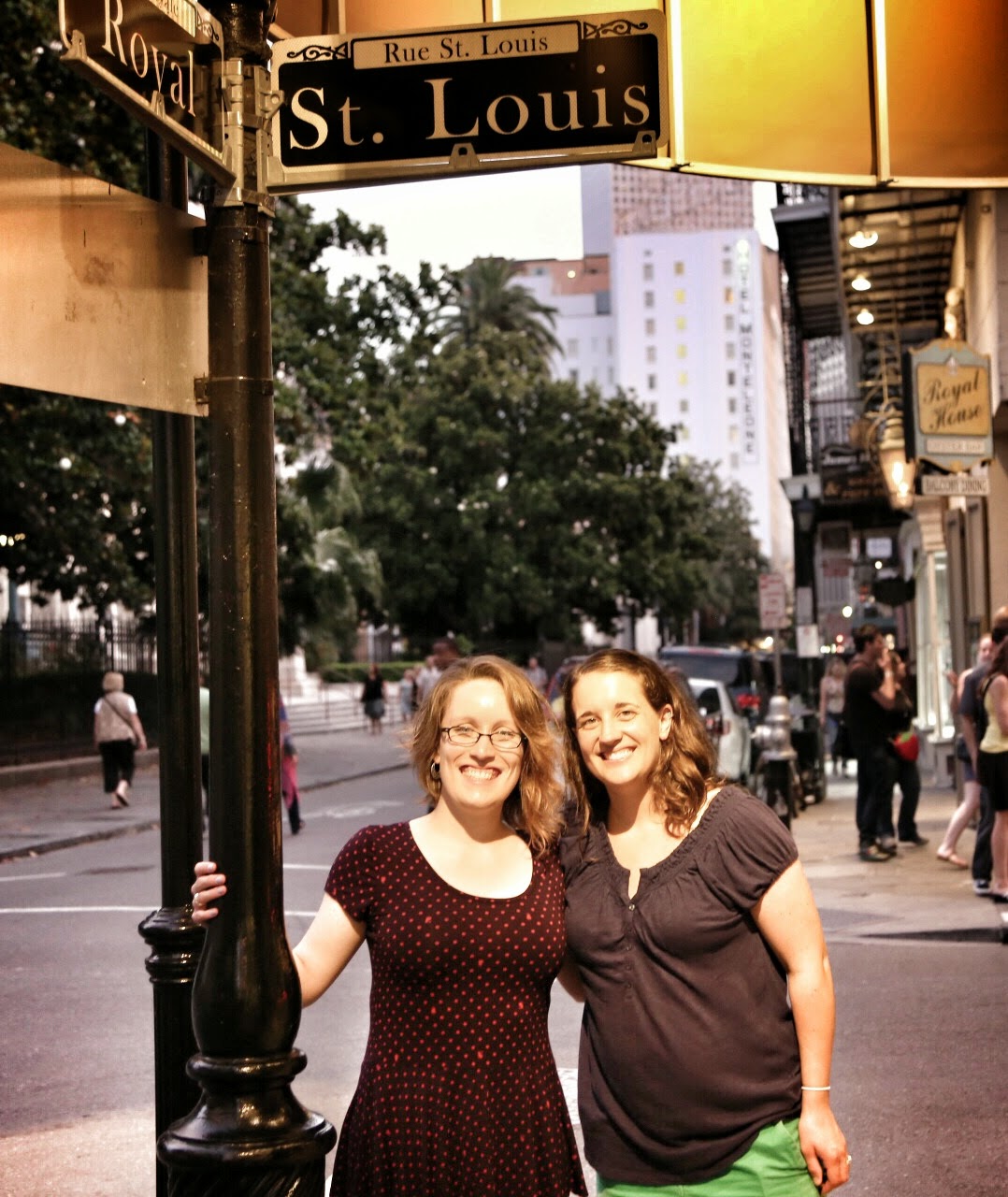 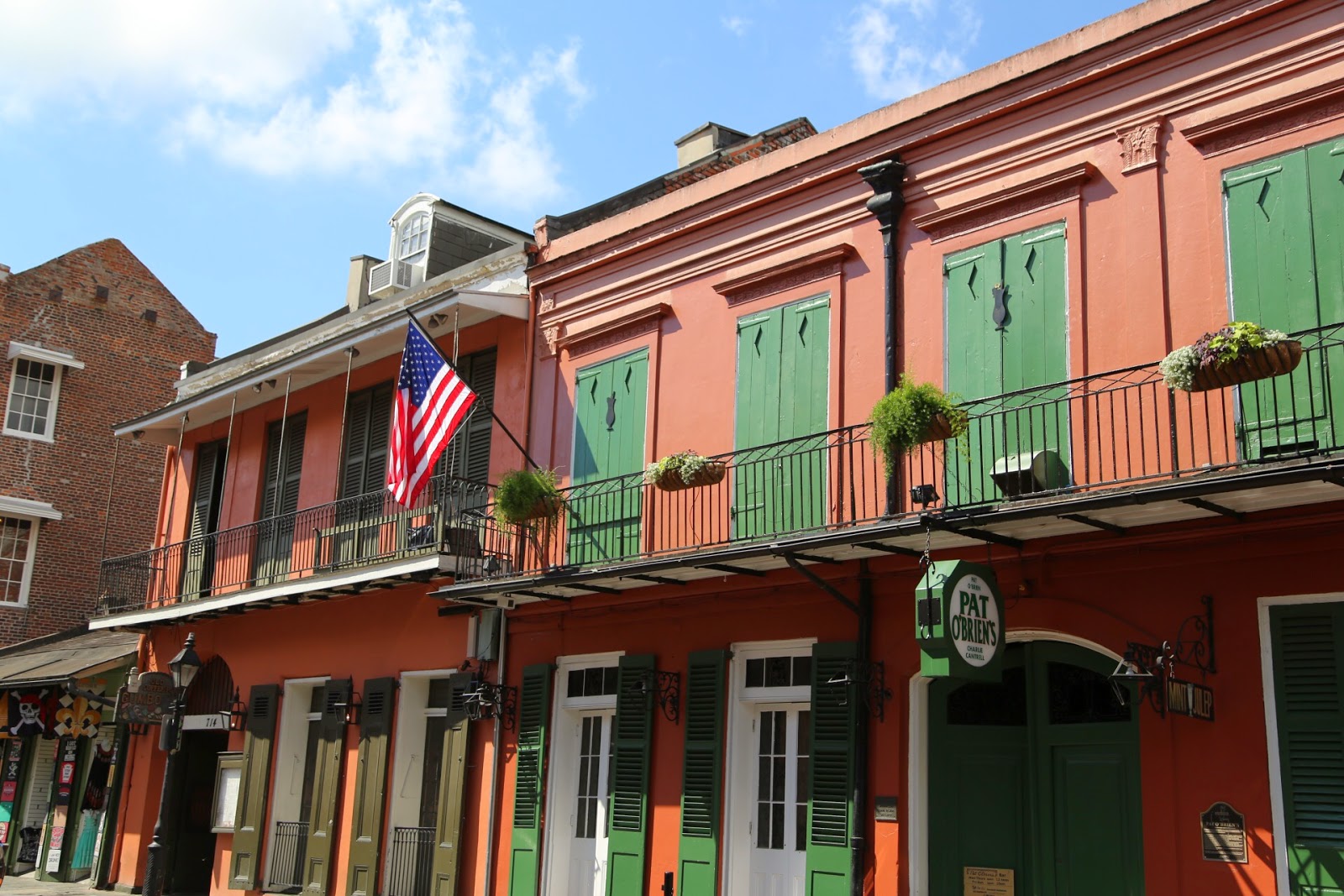 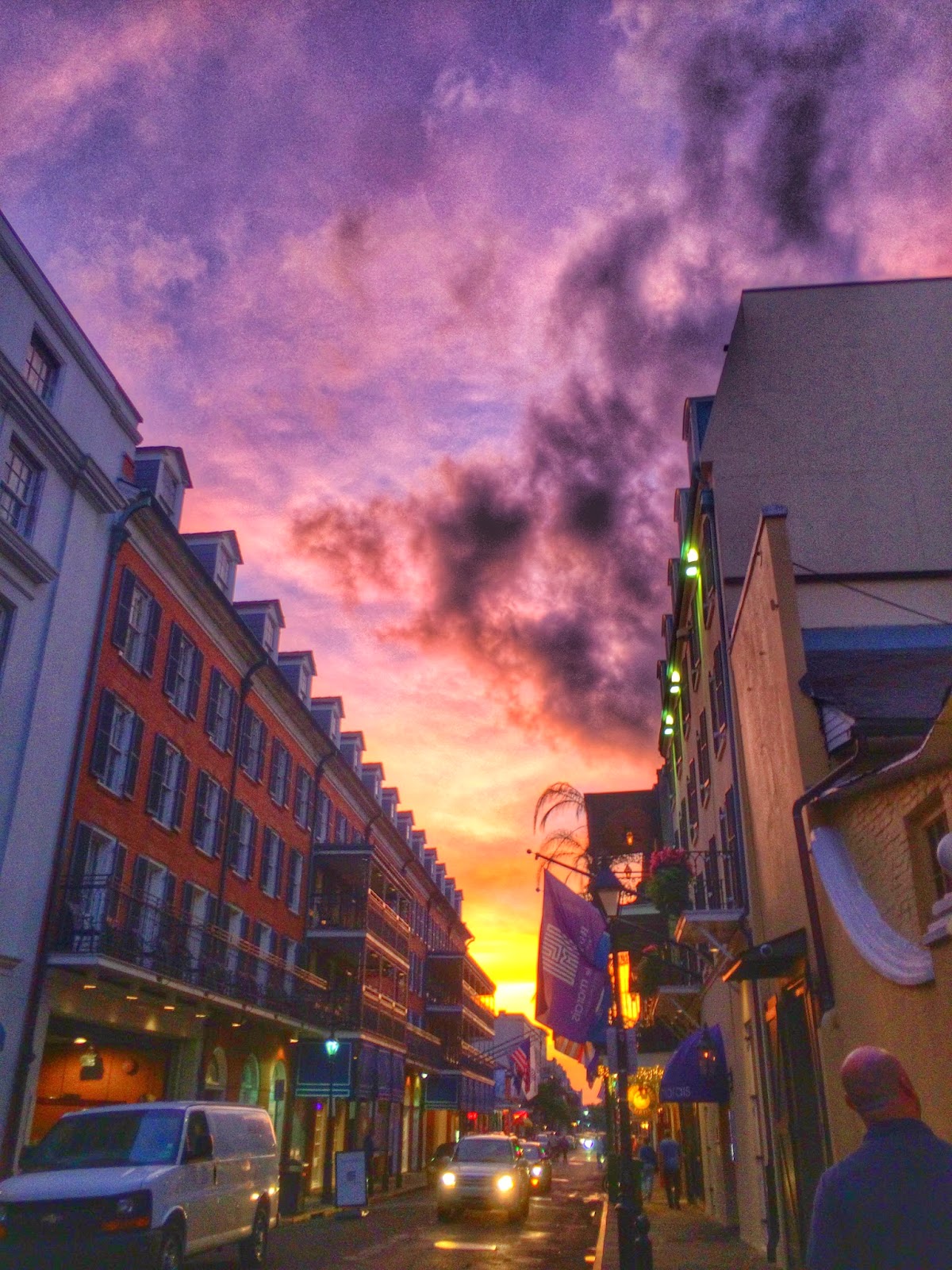 We made awesome time on the way down--only took us 10 hours!  Woo hoo!  Adam and Sarah had gotten to New Orleans a few hours before, so we met up with them once we got in for dinner and drinks...then we parted ways from them pretty early because Mike (and me, I'm always tired) were zonked and we wanted to get a good nights' sleep.  Mike did get to trade a patch with a New Orleans police officer, so now he has a NOLA patch to add to his patch collection! 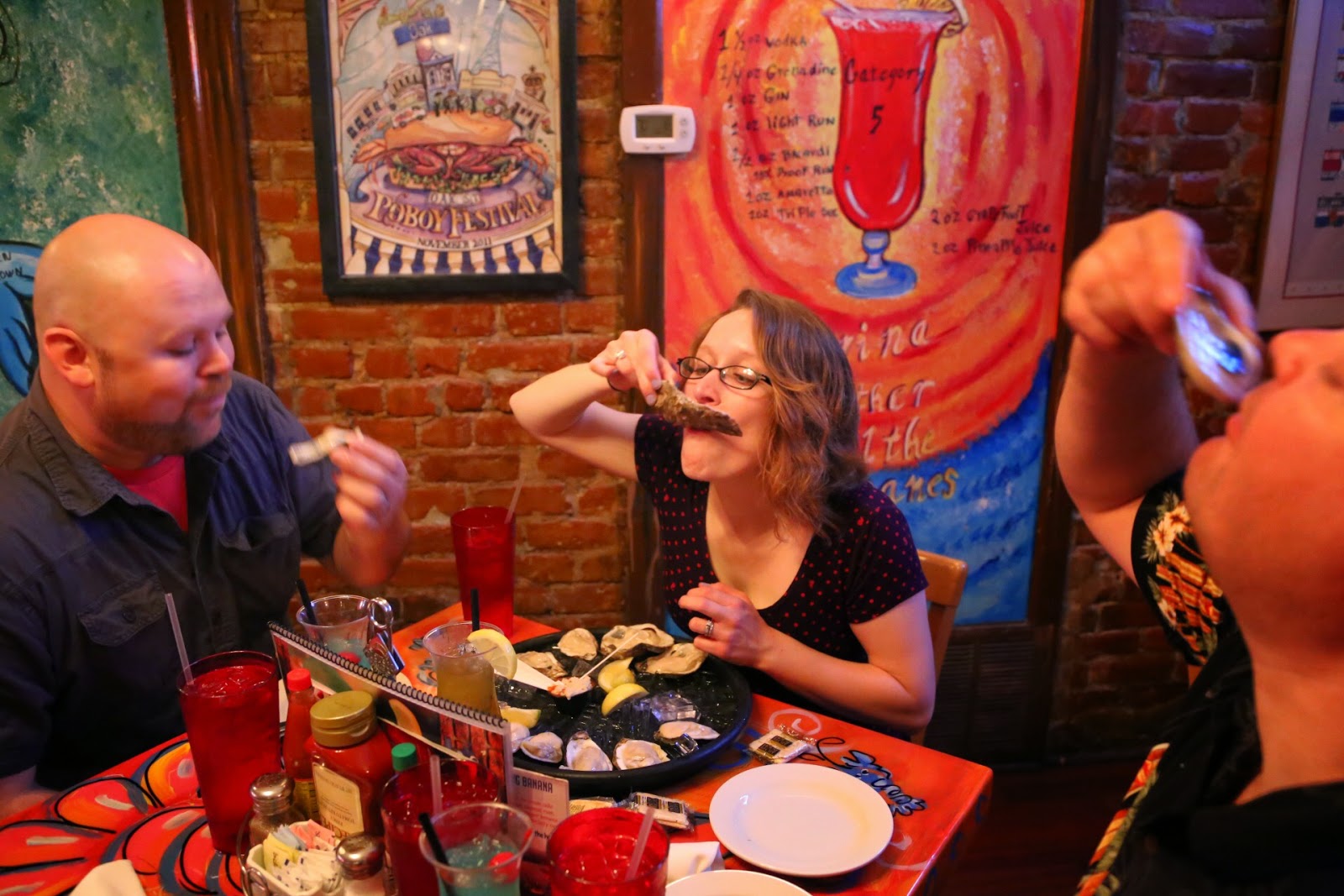 Oh my gosh, the seafood here was INCREDIBLE.  Like some of the best seafood I've ever eaten!  Of course everyone except me loved the oysters (good for them), but I really loved the shrimp I had!  I think I got the shrimp at every place we went and it seemed like one places' was better than the next!  Side note, if you're coming to NOLA, Acme Oyster House was our FAVORITE.  We aren't patient people and we hate lines: we waited over an hour to eat at this place and it was sooooo worth it.  Definitely check it out if you're going to New Orleans.

Also, the beignets were ah-mazing too.  They were like funnel cake donuts.  OM NOM NOM. 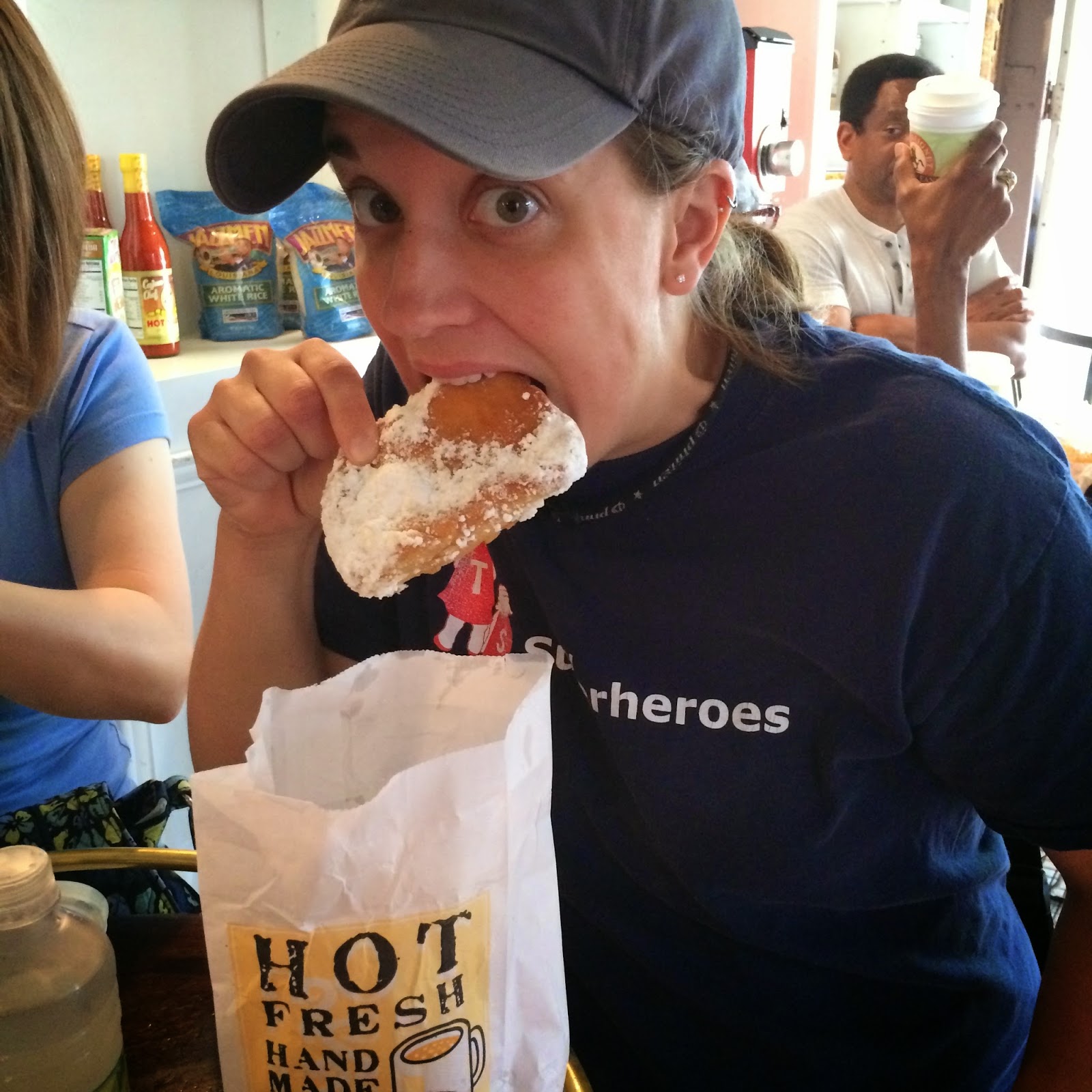 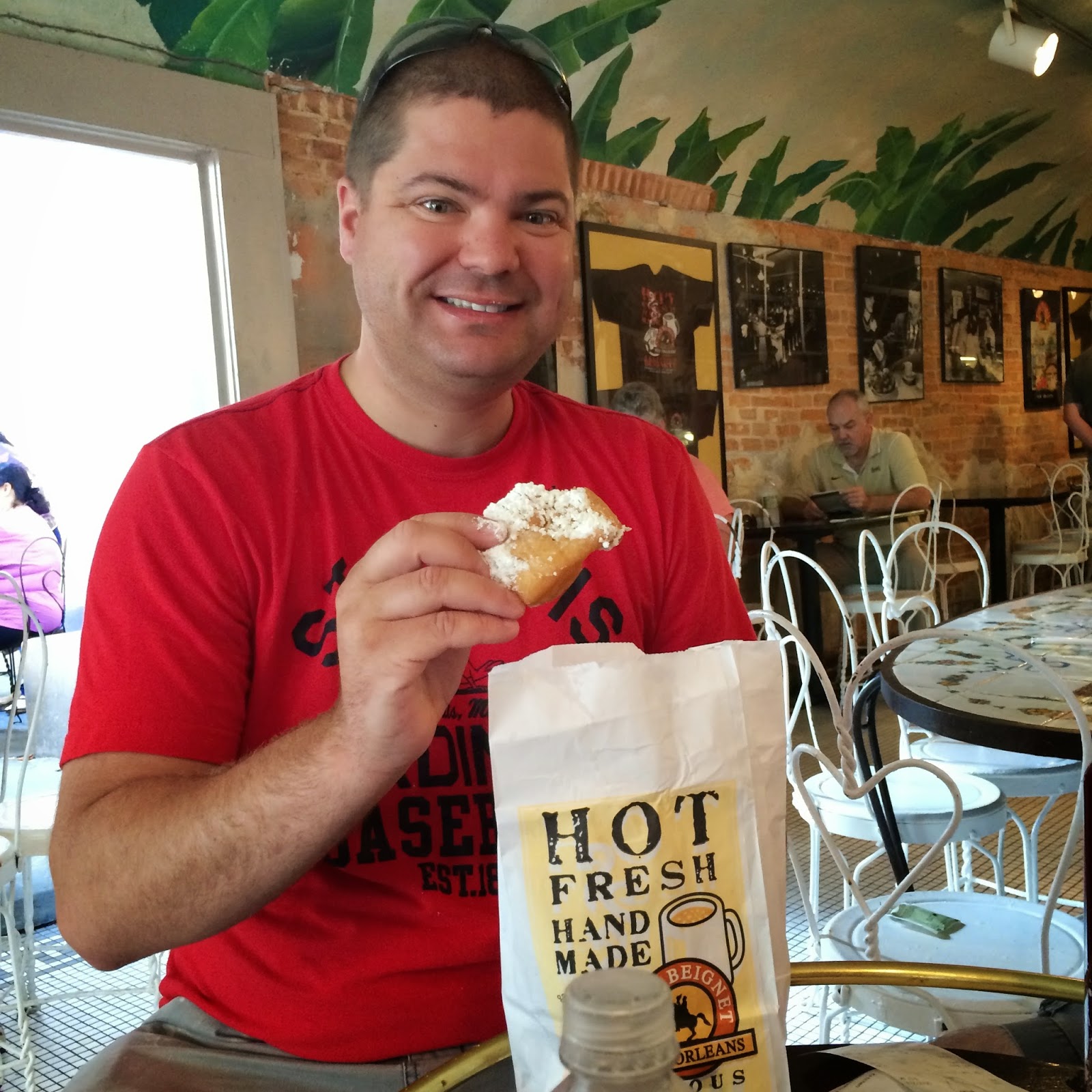 Since the wedding wasn't until 7pm Saturday evening, we had all day Friday and Saturday to explore and be touristy. 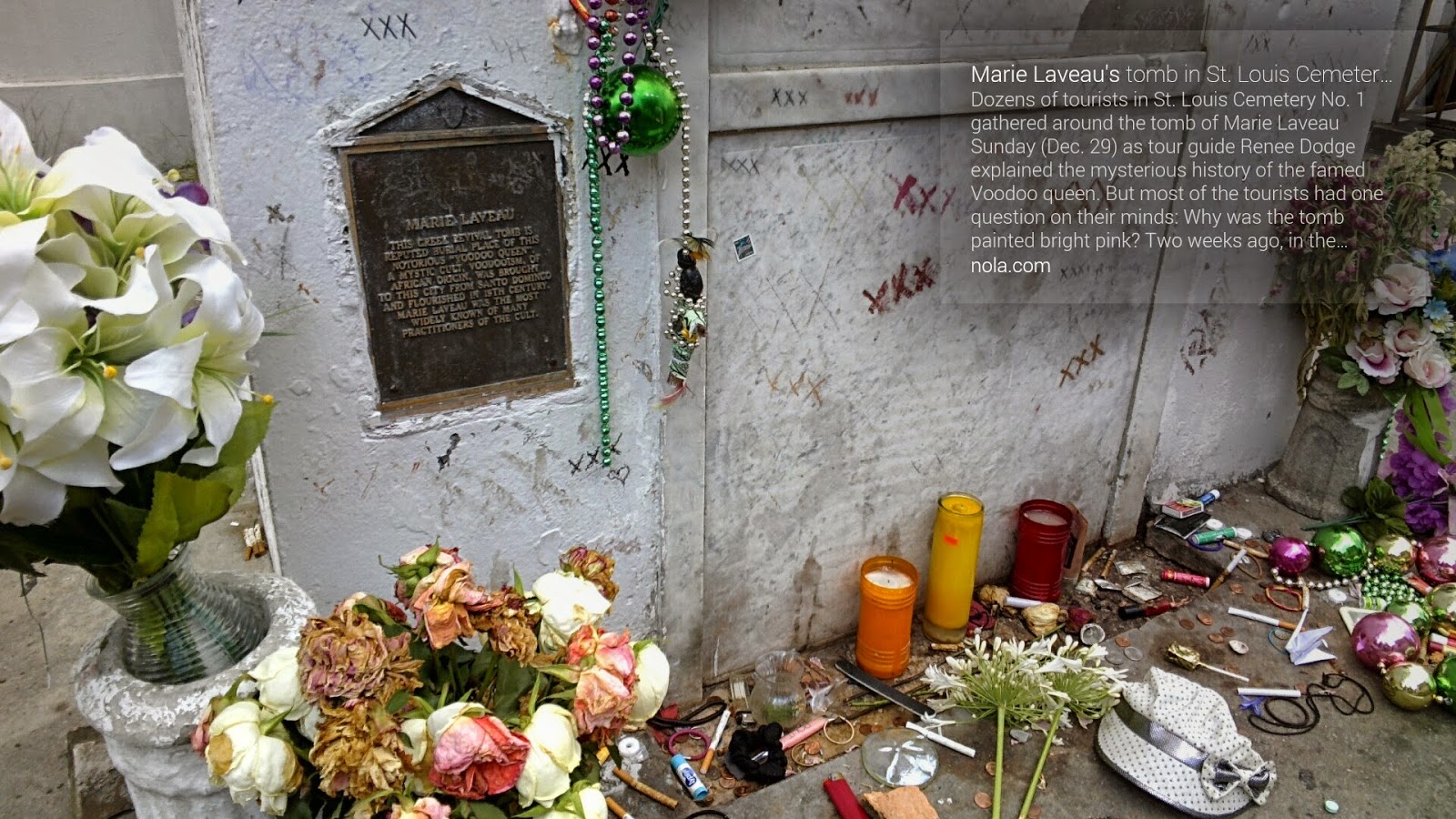 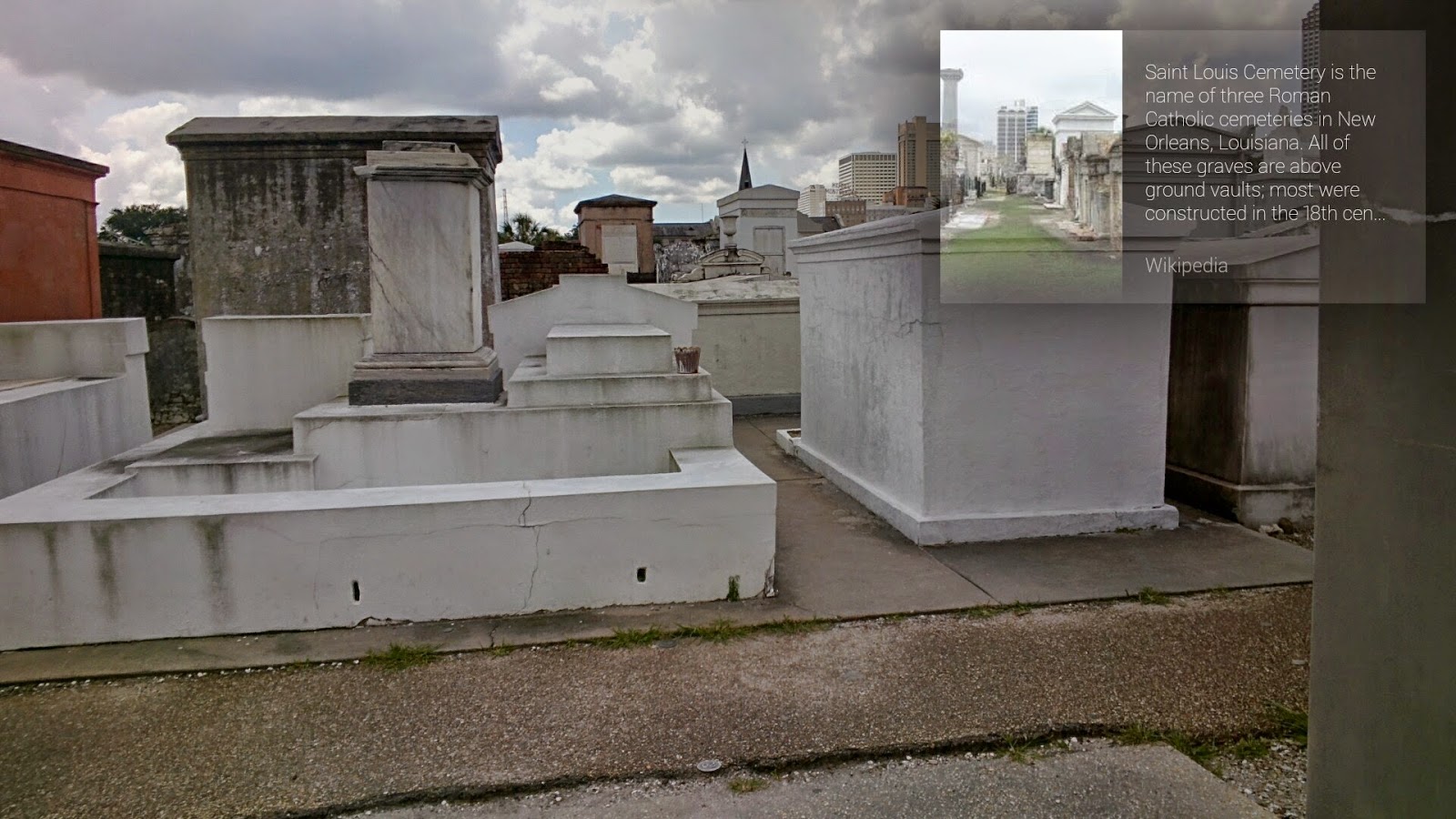 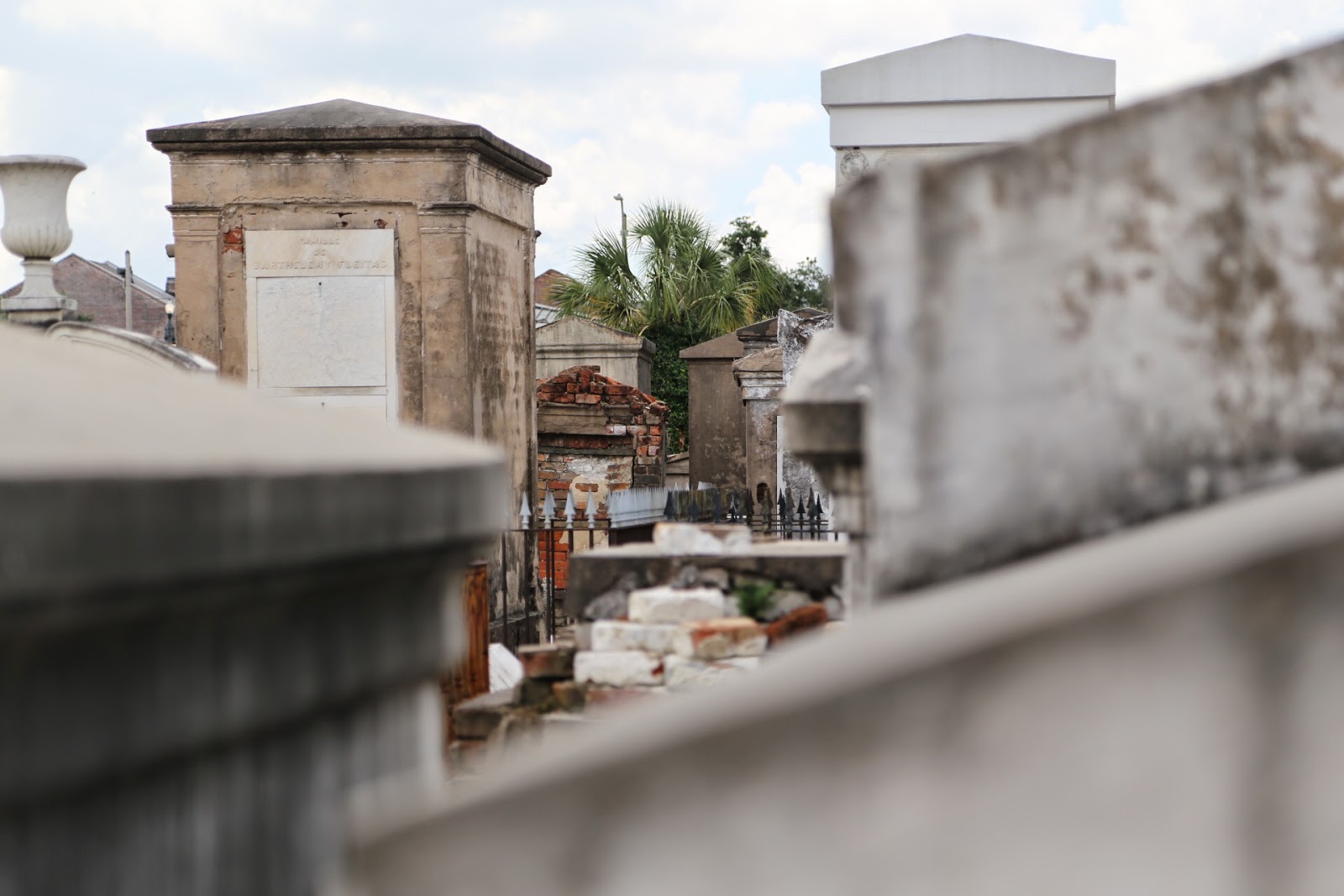 Friday we decided to take a cemetery tour--and it was GREAT.  We did one with Ernie--who I strongly recommend taking a tour from!  I left him a nice little review on Yelp saying how much we enjoyed his tour!  This guy was hilarious, sarcastic, witty, and definitely knew his stuff.  I learned a ton from him--and we got to see some pretty cool cemetery stuff on our tour. 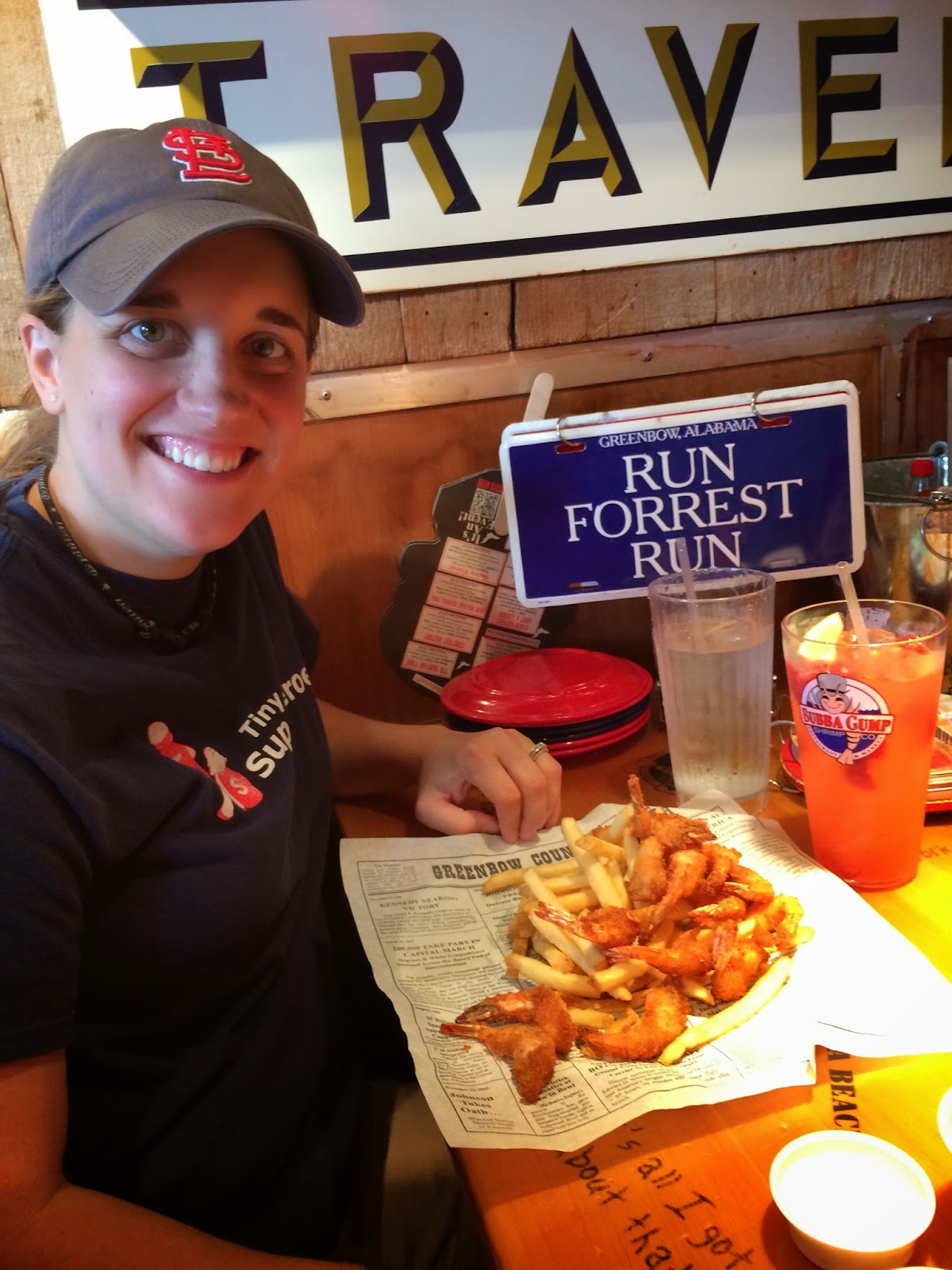 We then ate lunch at Bubba Gump Shrimp Company, one of my favorite restaurants.  Mike I don't think is a huge fan because it's a "chain", but, to be fair, it's a SEAFOOD chain that's typically only in cities by water!  Either way, I love Forrest Gump more than any other movie and I will always seize the opportunity to eat there if we're in a city that houses that restaurant. 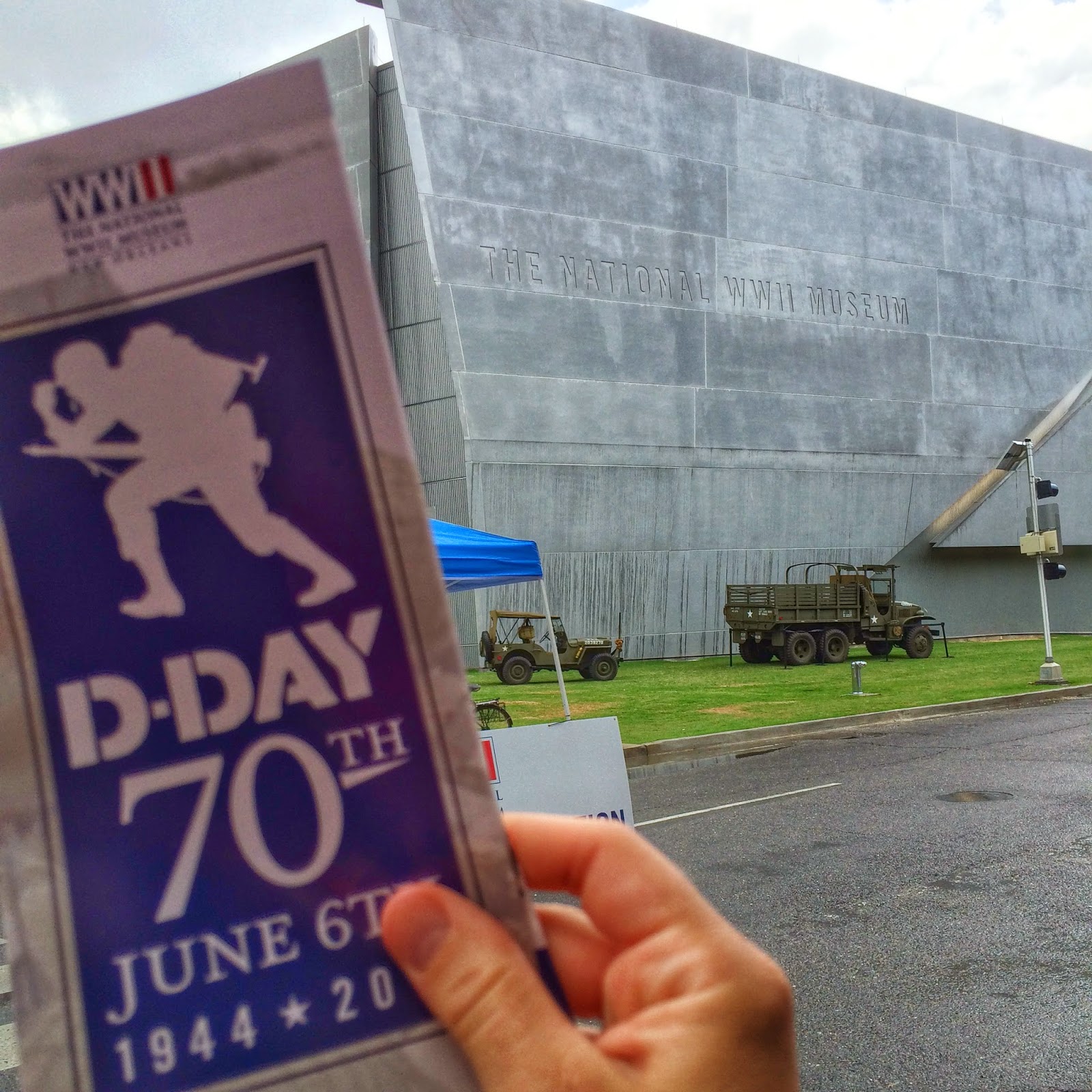 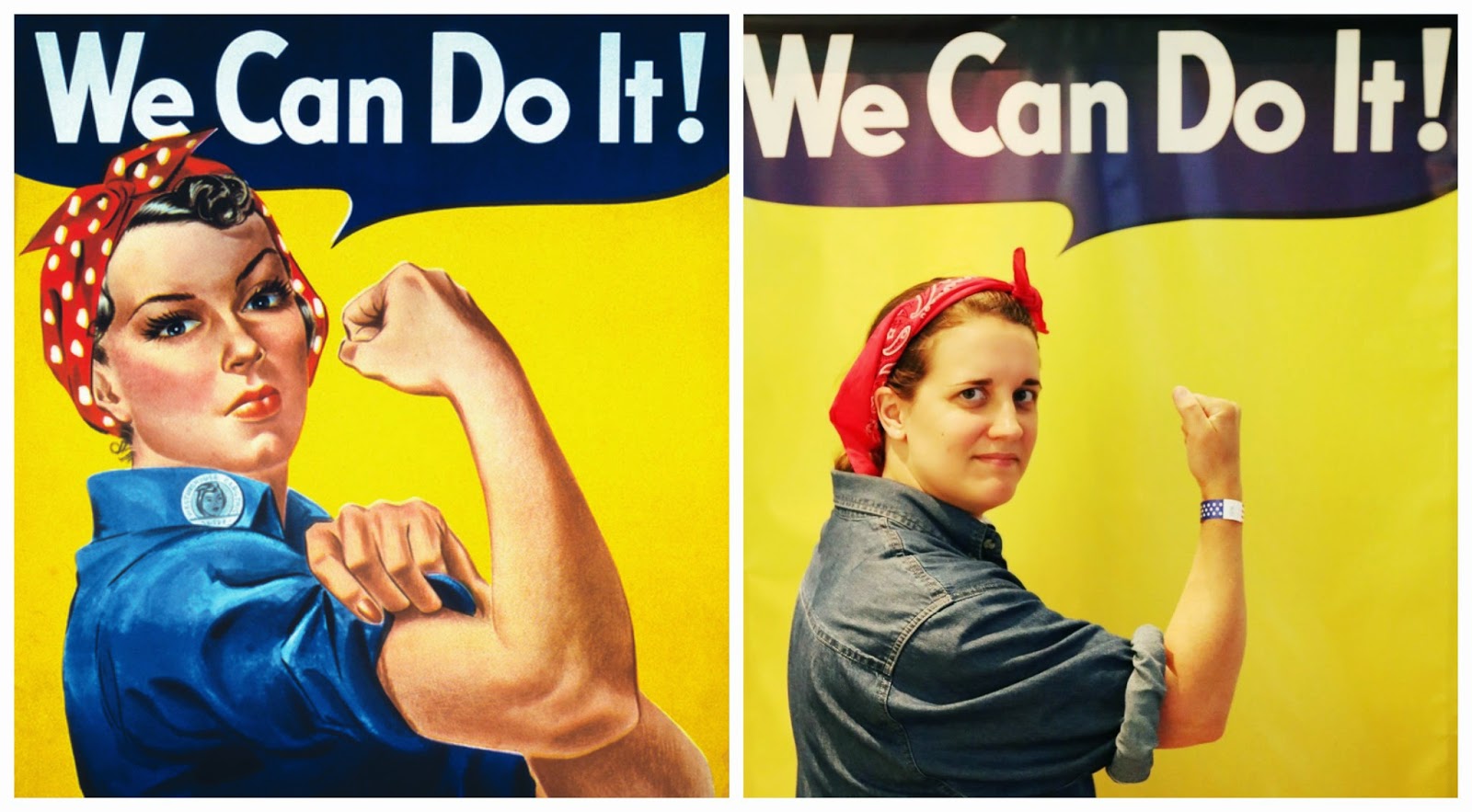 Mike and I decided to check out the World War II museum, since we both love museums AND it was the 70th anniversary of D-Day (June 6th)...so we felt it was an appropriate place to be.  Wow.  Yes it was.  This museum (formerly the D-Day museum) was awesome--definitely a must-visit if you're in NOLA.  We saw the Tom Hanks 4D movie experience there "Beyond All Boundaries", which was great, and then spent several hours touring the museum.  The have a Higgins boat in the main gallery in the museum and for that day only, you could actually go on it and hear a talk about what they were used for.  This was awesome.  So glad we got that opportunity to do!

I should add that while we were at the WWII museum Mike got a phone call that he was being transferred to the Crime Lab! EEEEKKKKK!!!!  He applied to be a "CSI" (evidence technician) a few weeks back, did a ride-along, interview, and then found out that he got the job!  I am (well, so is he too :) SOOOOOOO EXCITED for this new position!  He won't be on the "streets" anymore responding to radio calls, he'll instead be coming to scenes that he's called out on to collect and process the evidence.  Kinda like the CSI tv show, except not at all like it (haha, make sense?!!).  Anyways, I am super duper thrilled for him! 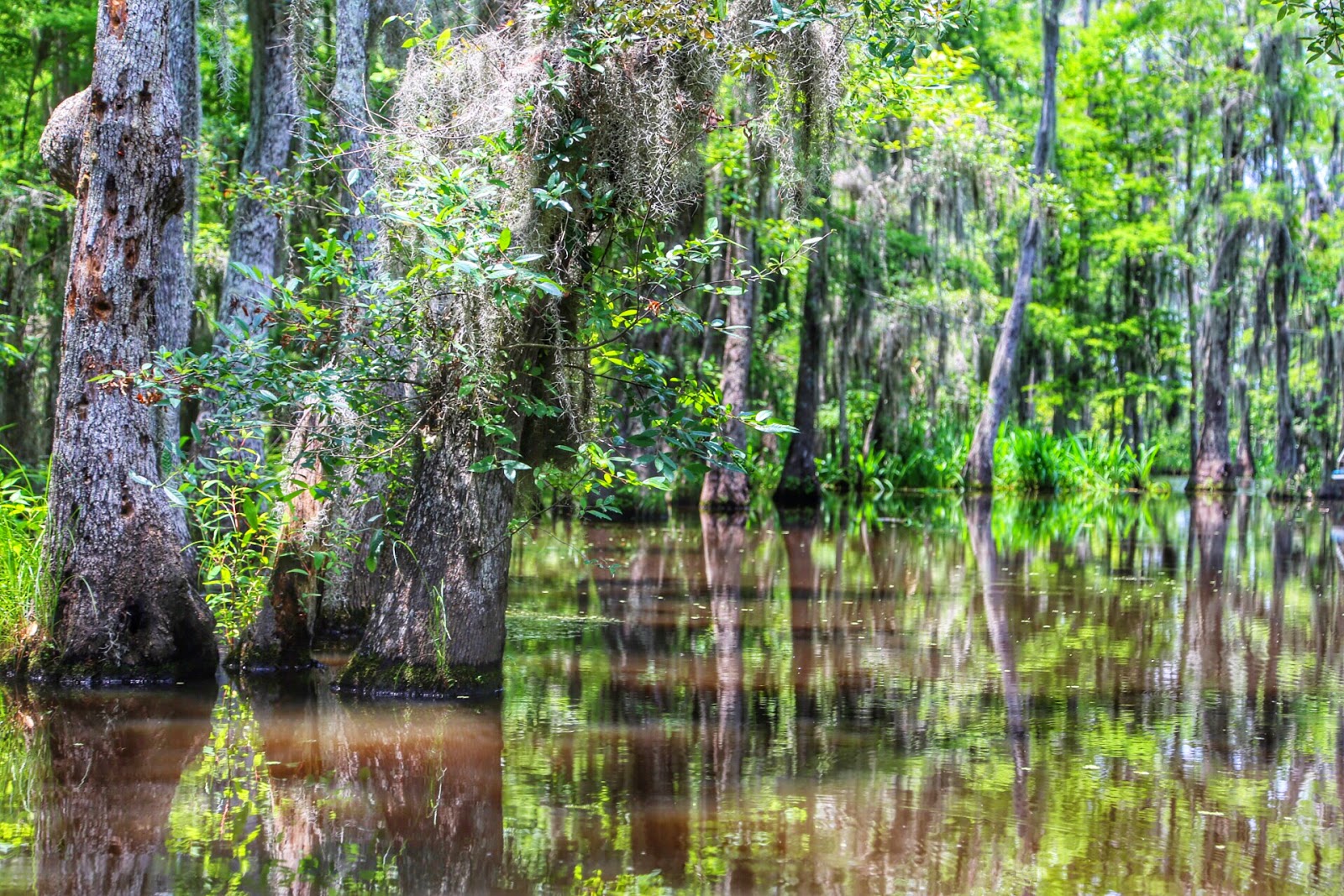 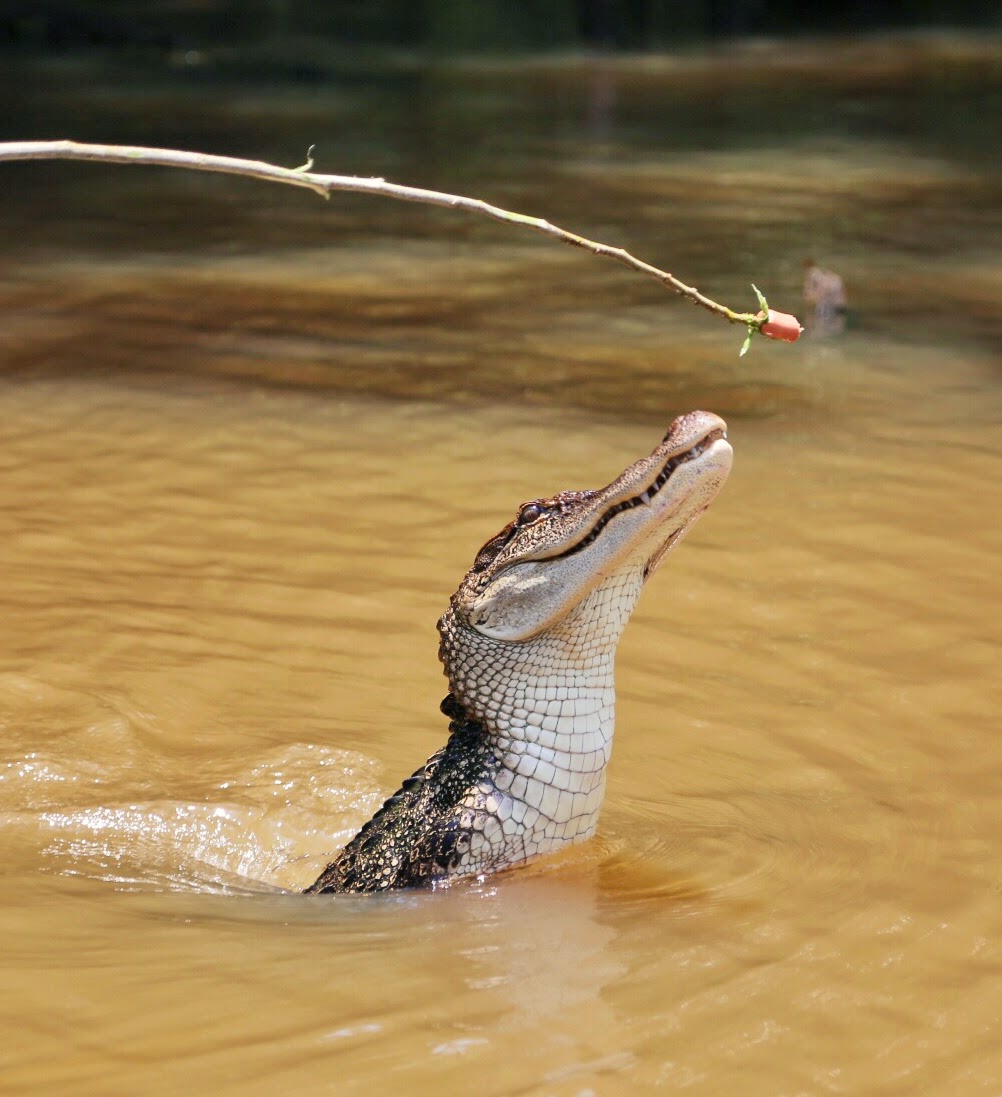 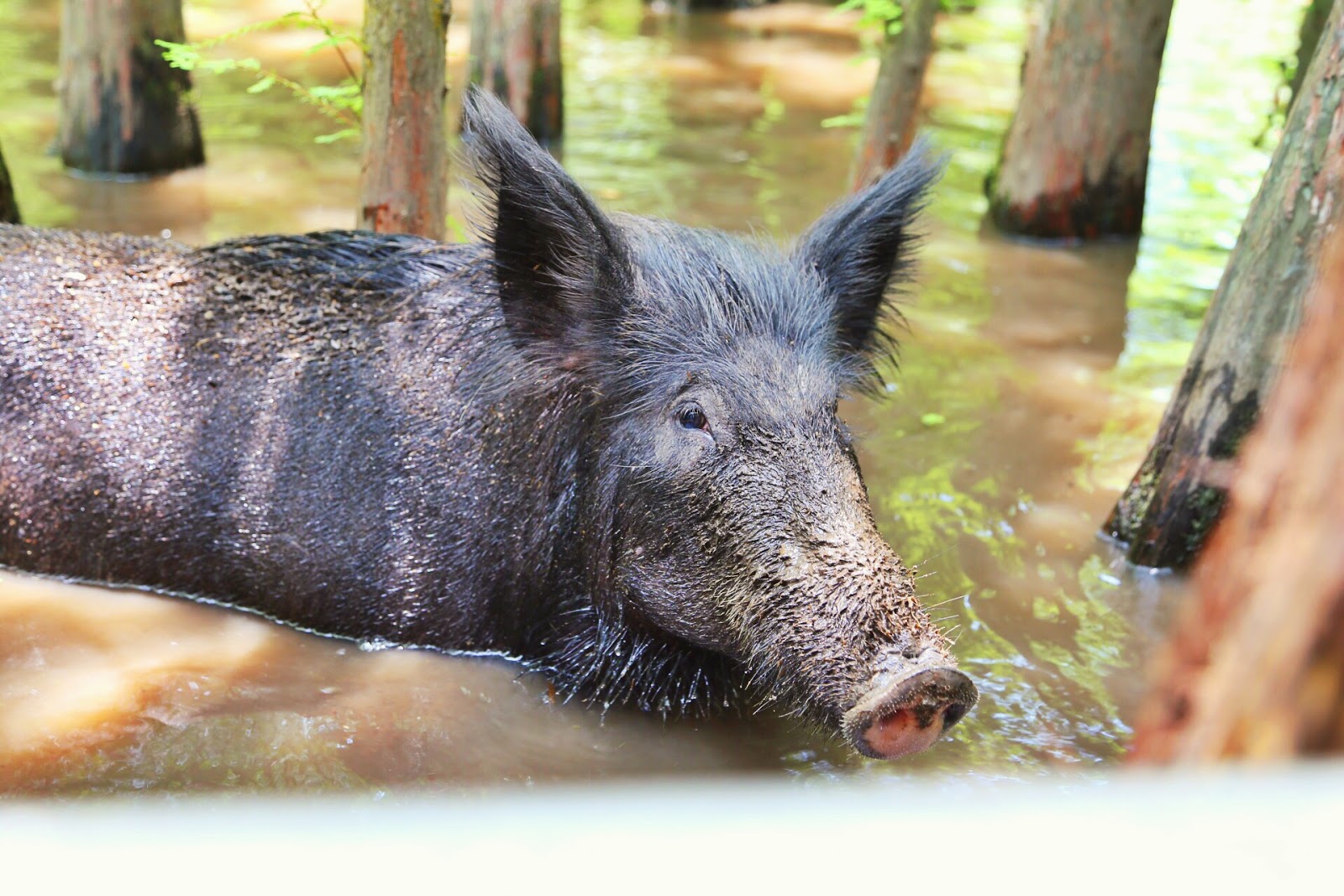 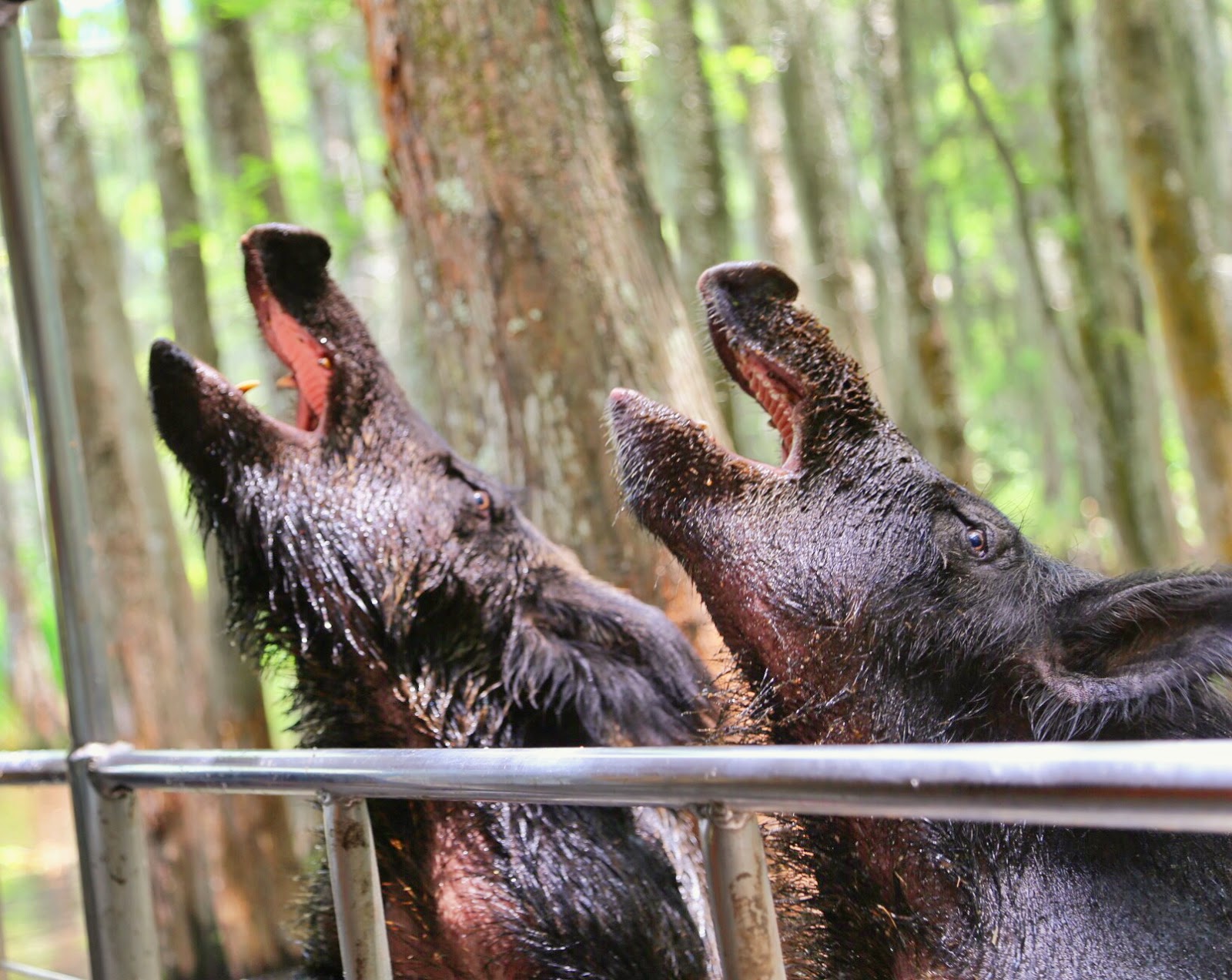 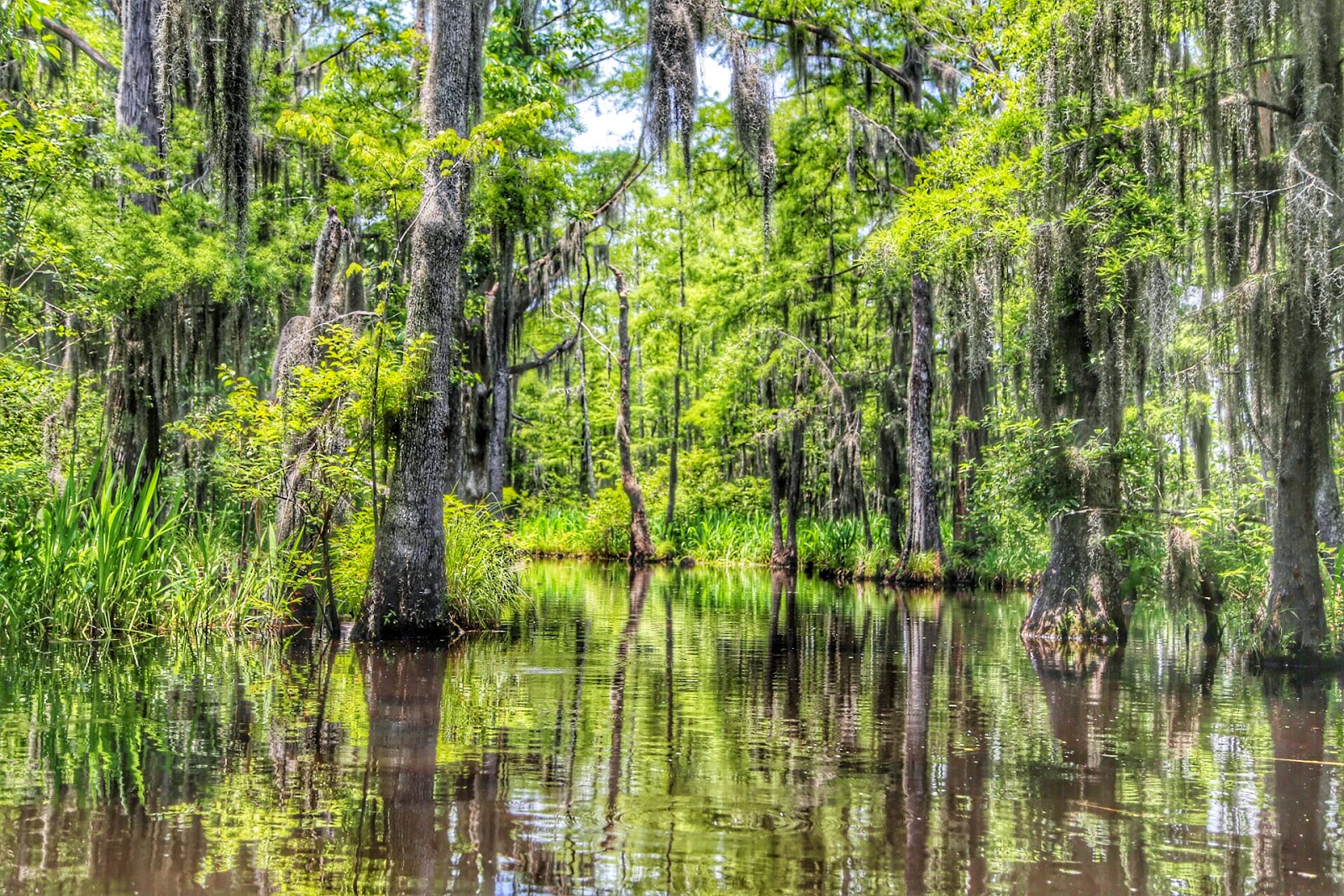 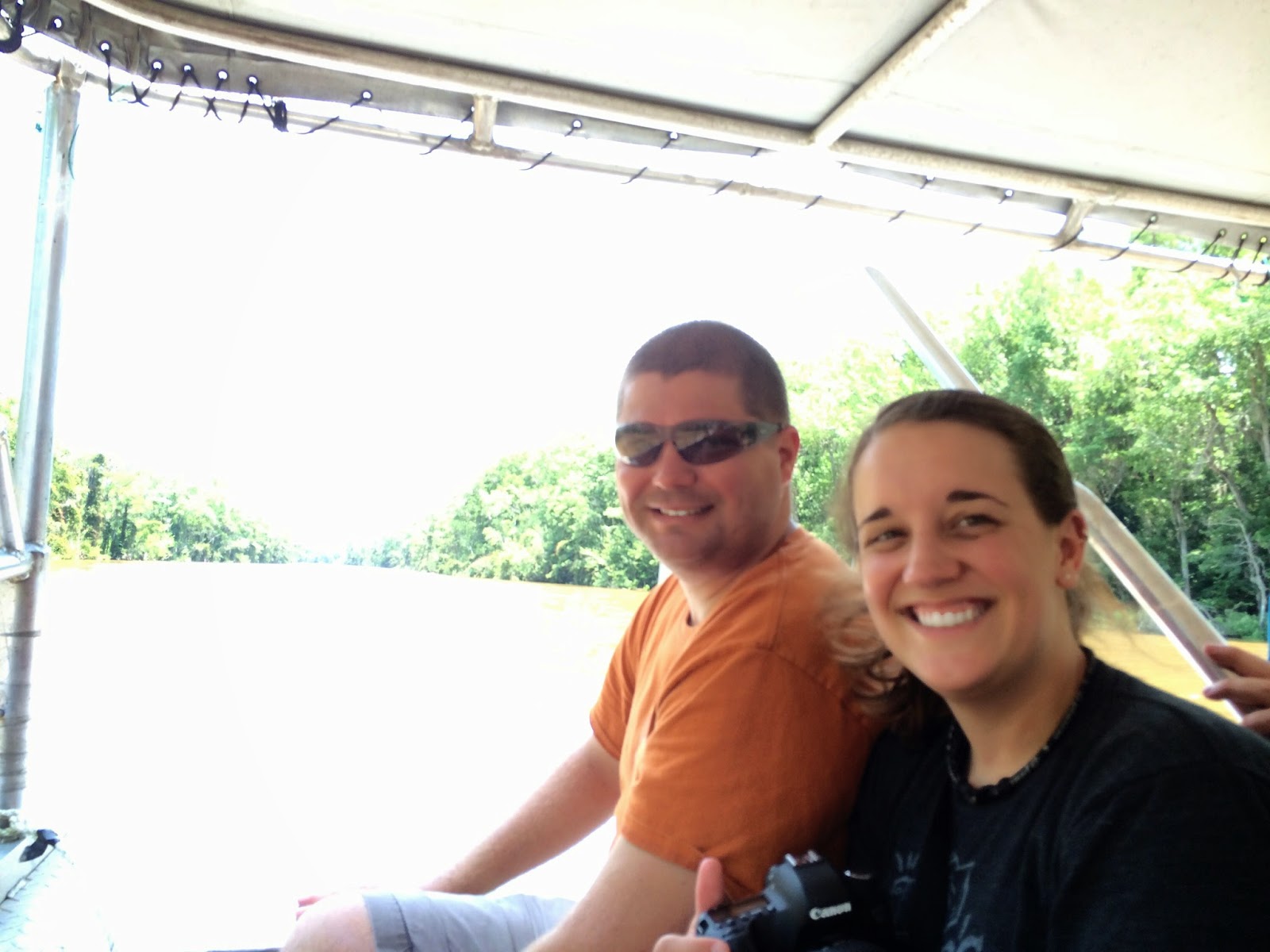 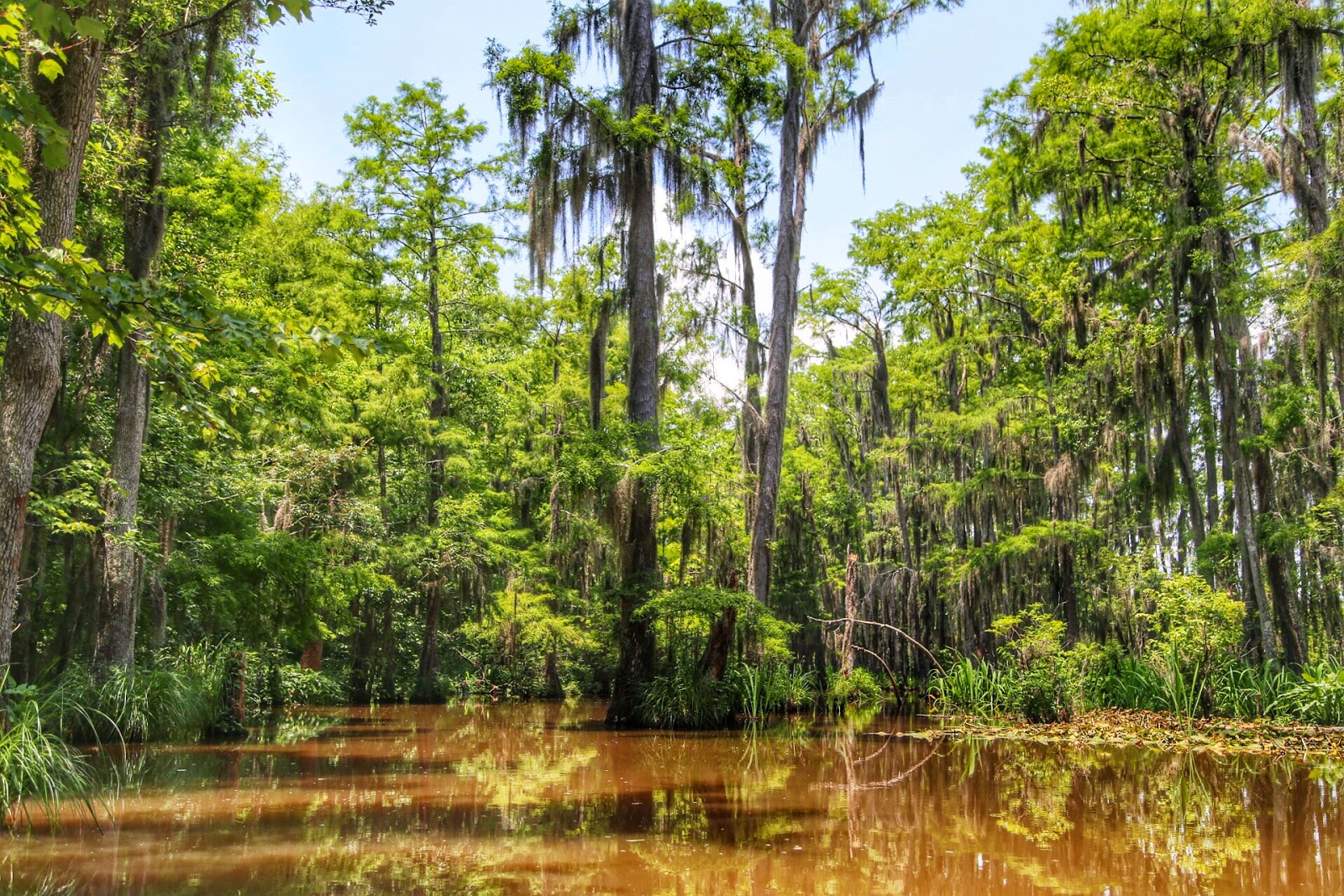 On Saturday we decided to take a swamp tour before we needed to get back and get ready for the wedding.  This was definitely one of my favorite parts (next to the museum) of our trip!  I made sure to bring along my beloved EOS 6D camera to get some good shots of the swamp creatures, and I'm sure glad I did!  I got some great pics of the alligators, wild pigs, and green scenery. 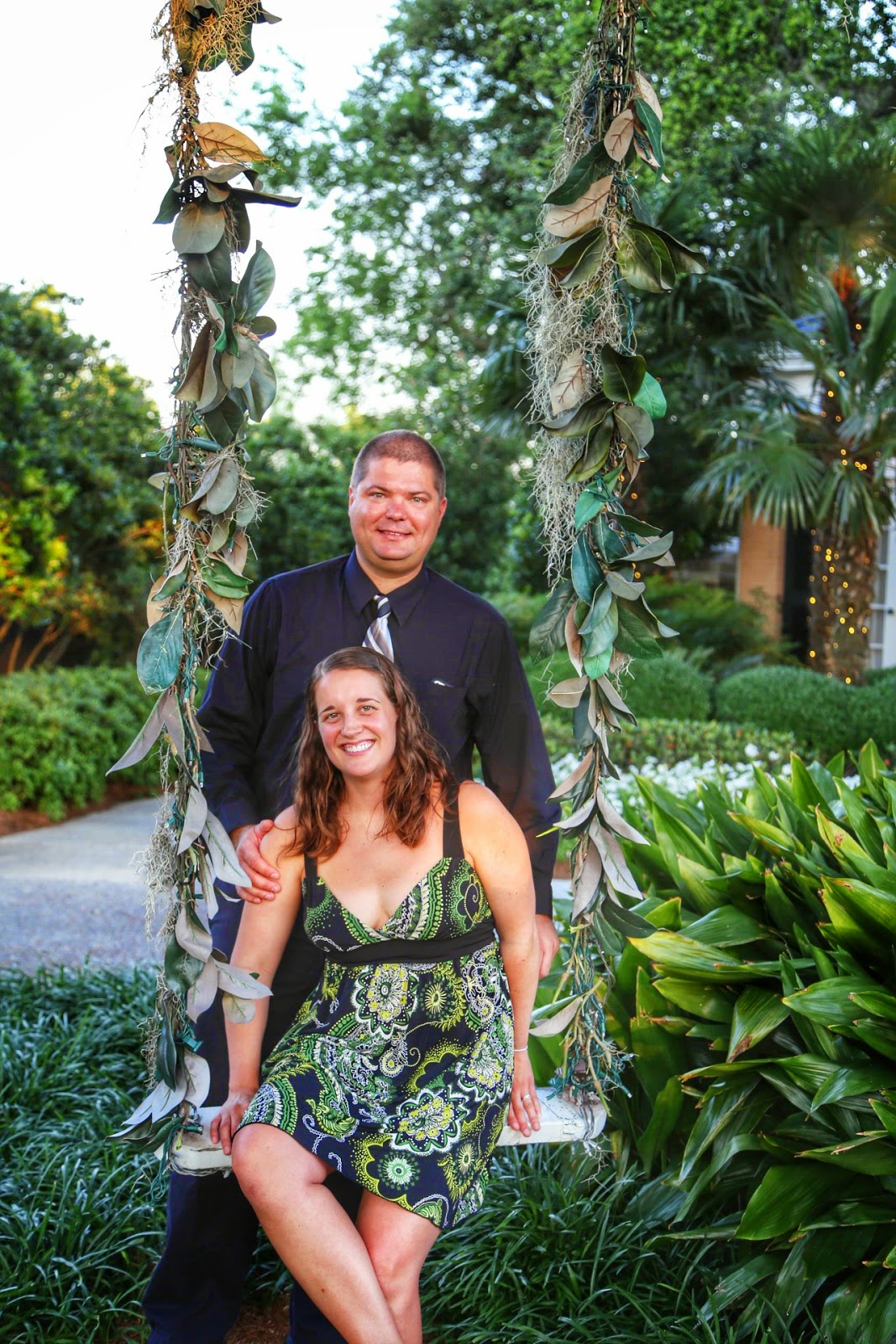 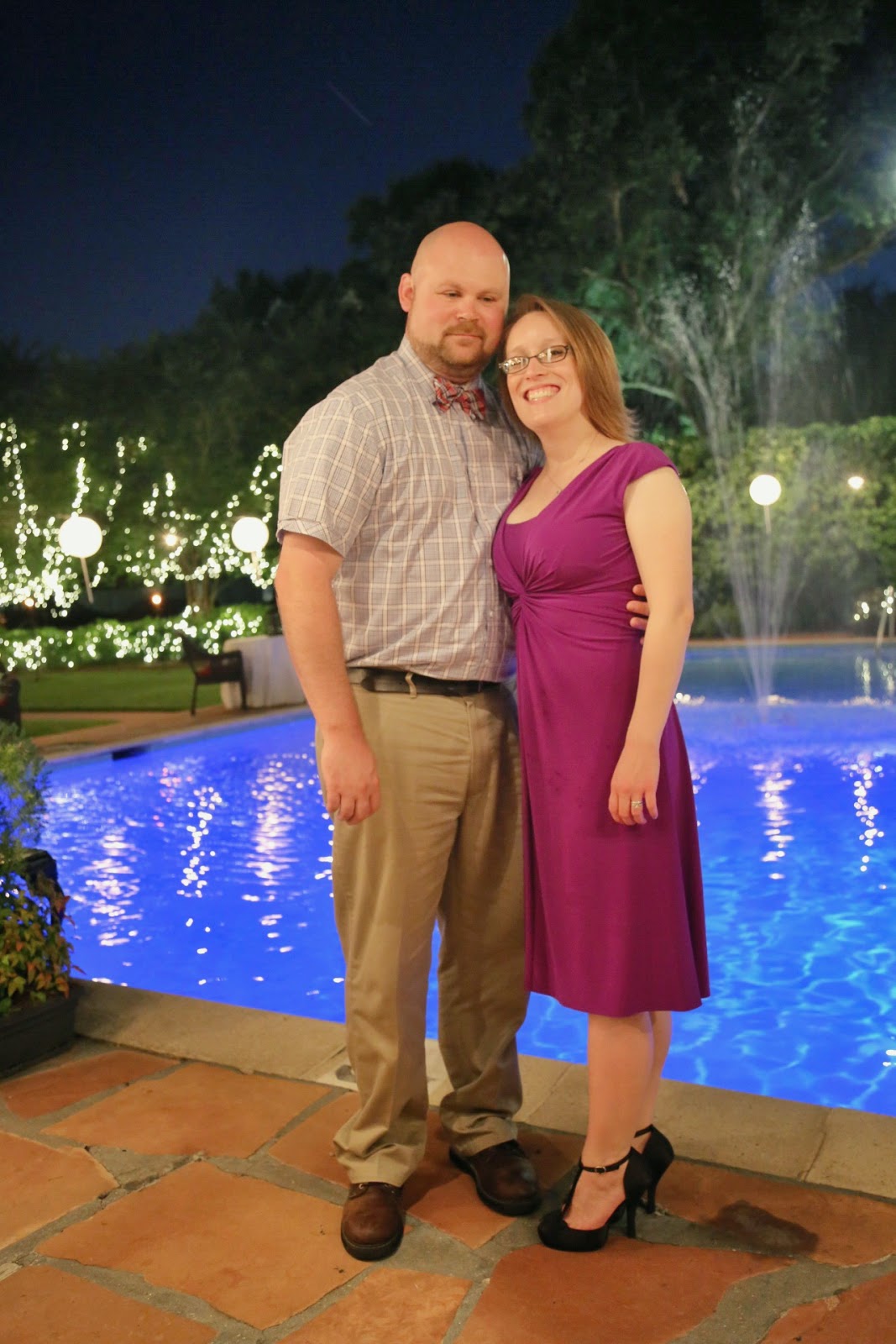 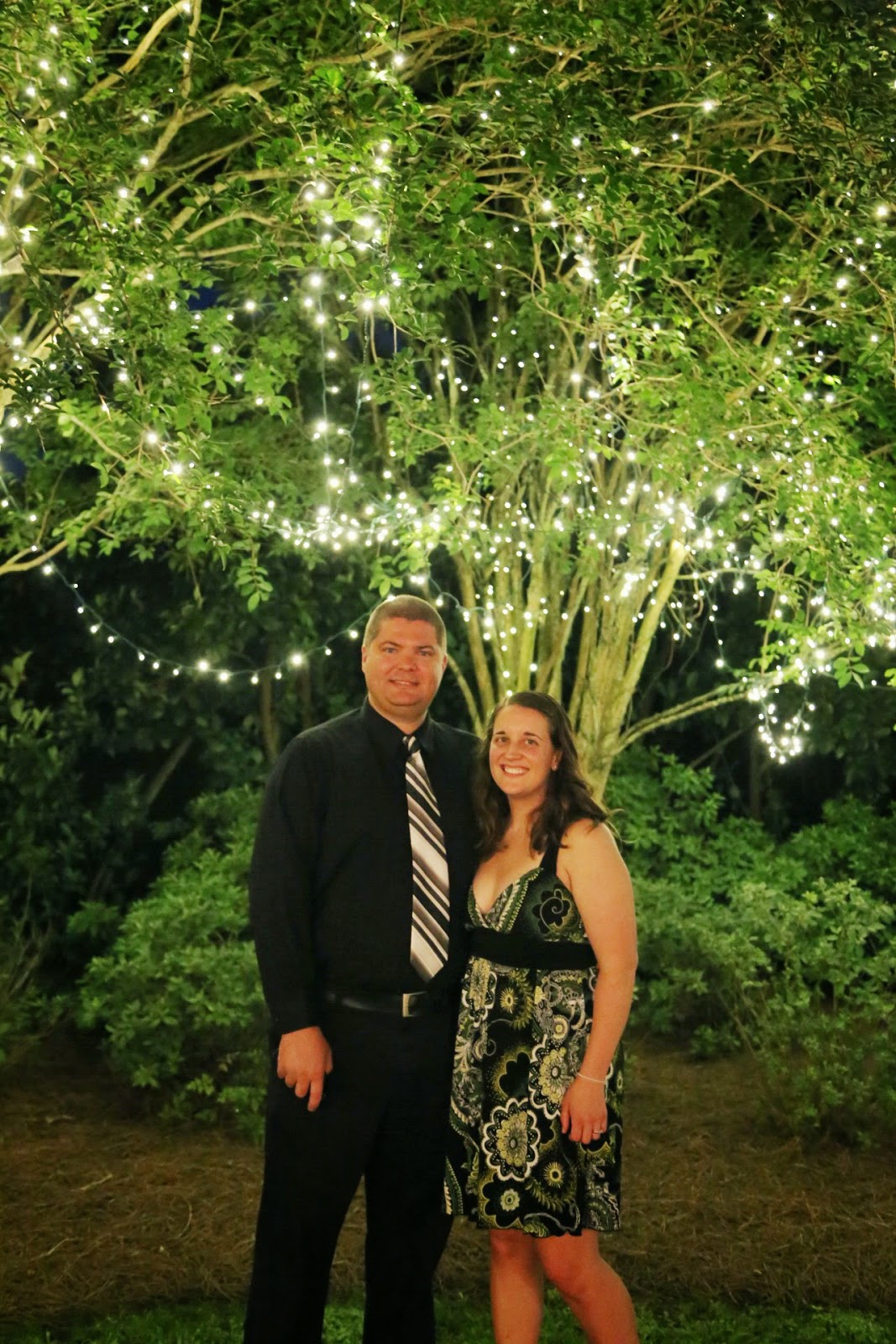 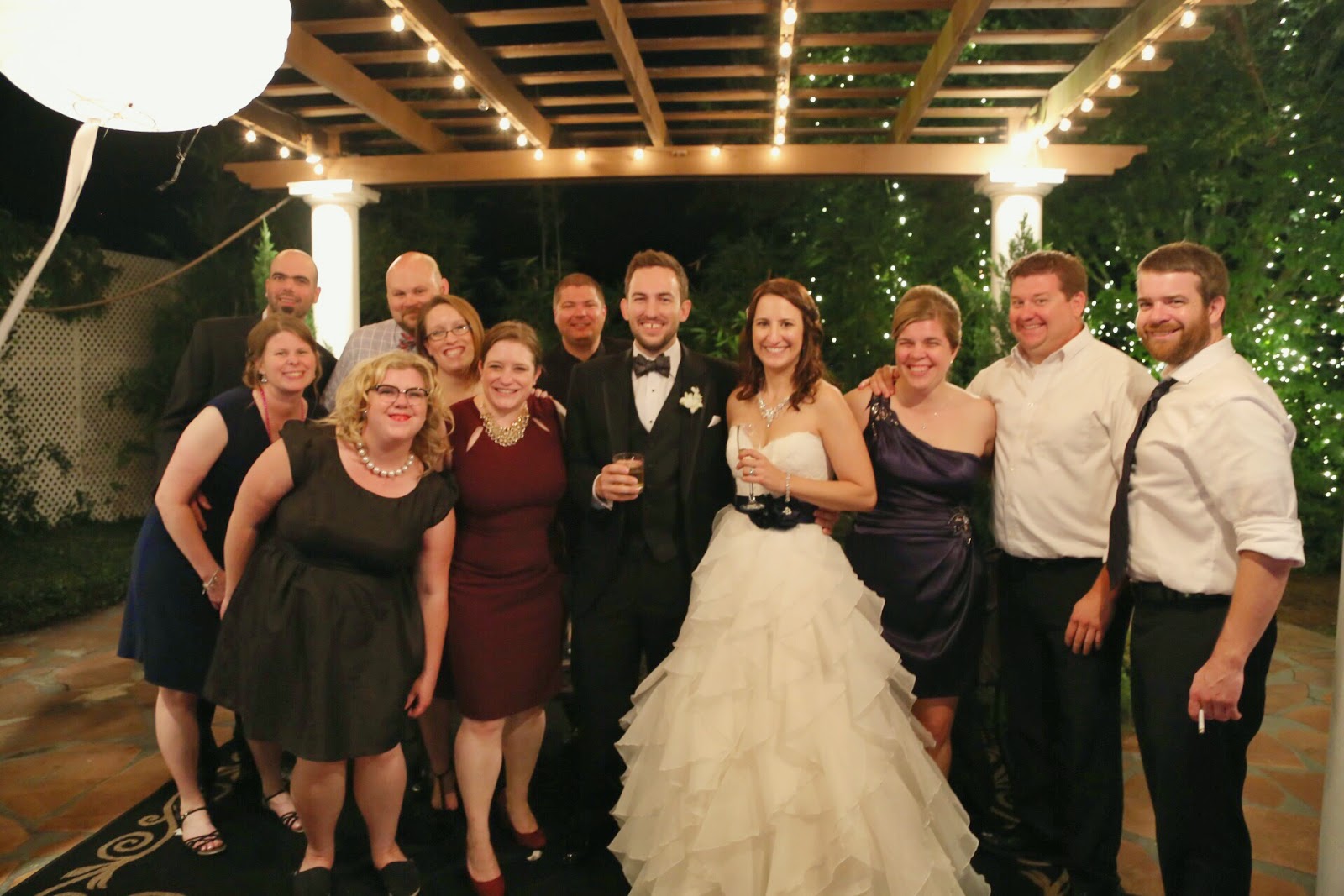 Saturday night was the wedding at Southern Oaks Plantation.  OMG.  I don't want to know how much this cost them to have it there...cause it was absolutely GORGEOUS.  The scenery was amazing, the food and music superb, and the general atmosphere was just incredible.  It was great to be able to be there for Jen and Matt's special day.  They had a "progressive" food set up...definitely something different, but super cool because all throughout the night servers brought around EIGHTY (yes, 8-0) different items/entrees for you to have!  To say we were stuffed by the end of the night was an understatement!  But it was so good!  My favorite was the cheesy-broccoli bites.  These were ah-mazing.

Whew, so after a jam-packed couple days in New Orleans (and missing Patrick (and Scooter too!)) immensely, we started our journey home.  And I say started because we drove only about halfway, to Tupelo, Mississippi, to spend the evening with our friends Jess and Andy (and their little guy Wyatt) who just moved from STL to Tupelo.  Oh boy, how we miss having them so close!  It was so great though being able to catch up with them, see their new place, and hear all about Mississippi life.

Then, after some dinner and chit chat, we headed the rest of the way home--which I was soooooooo excited for, because I could not wait to get home and squeeze my boy! --except we're not picking him up till tomorrow since he'll be snoozin' when we get in! Ohhhh, more anticipation!

We had such an amazing weekend with just us (which, I definitely recommend my parent friends doing if you haven't!  Yes, family vacations are fun, but sometimes parents-only vacations/long weekends are JUST WHAT YOU NEED too!).  However, we are so excited to get home to our little man (or little men, if you include Scooter--who had a wonderful weekend, by the way, at his BFF Braxton's house! Check out #ScooterandBraxton on instagram if you want to see their shenanigans).

Whew, sorry for the long winded post...but just wanted to share our NOLA weekend fun with you all!  Here's to a great start to what I know will be an amazing--and memorable!--summer!
Posted by Alexandria Mooney at Sunday, June 08, 2014